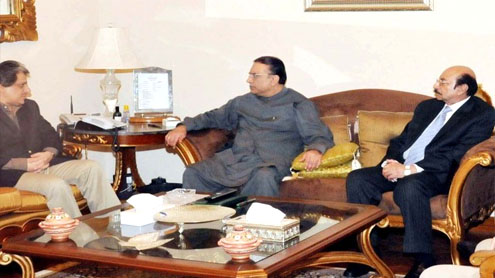 Govt to restore law and order in Karachi at any cost

KARACHI: President Asif Ali Zardari said that the restoring law and order in Karachi is the topmost priority of the government.

The meeting discussed current political situation, matters relating to coalition, local bodies election in Sindh, developmental issues, flood situation and the law and order situation in the province, particularly Karachi.Chief Minister Syed Qaim Ali Shah briefed the meeting on the steps being taken to maintain law and order in Karachi including equipping the law enforcing agencies with modern tools to fight criminals in effective manner.

The President reiterated that the restoration of complete law and order and stability and the protection of lives and property of the citizens in the Port city was the priority of the Government and that no comprise would be made in this regard.The President while condemning the incidents of violence in Karachi directed that criminals and all those involved in disturbing peace and stability in Karachi be tackled with an iron hand regardless of political affiliations.

The Chief Minister also apprised the President about yesterday’s meeting of the Core committee of PPP Sindh and MQM.The President also advised the ministers, MPs and office bearers to reach out to the people especially in far flung areas in Sindh and enhance contacts with voters of their respective constituencies for redressal of their issues as part of party’s preparations for the forthcoming general elections to be held on time. – Onlinenews

India, China account for 40% of new mobile connections in Q2

India, China account for 40% of new mobile connections in Q2