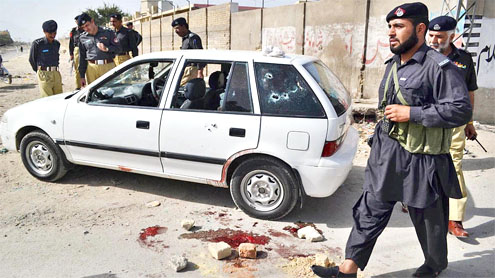 Balochistan Bar Association announced two-day mourning against the killing incident.According to local police, the session judge, Zulfiqar Naqvi was en route to his office along with his gunman and driver when he came under severe gunfire attack at a short distance from his residence located in GOR Colony.The three injured were rushed to nearby hospital where they succumbed to injuries, according to the police sources.

According to police, there were several gunshot marks on the vehicle of the deceased.The bodies were shifted to the hospital; police have cordoned off the area and started investigation.Police said Klashinkov and TT Pistol were used in the attack while the incident seems to take place due to old enmity.Following the incident, Balochistan Bar Association (BBA) and Baloch Bar have strongly condemned the incident and announced two days strike in the province. Dawood Kasi, the BBA President, demanded the government to arrest the killers of Naqvi.

Meanwhile, Malir Bar Association (MBA) has also announced a strike to lodge protest against the murder of Naqvi.Federal Interior Minister Rehman Malik condemned the incident and ordered an immediate inquiry into the matter.In a statement, Malik said enemies of the country wanted to destabilize Pakistan added that such incident would not be tolerated.