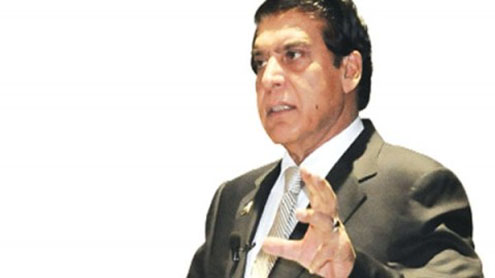 ISLAMABAD: Prime Minister Raja Pervez Ashraf has urged the ministries of Petroleum, Finance and Water and Power to coordinate and work collectively and ensure that the gap between the demand and supply of power was minimized.

The prime minister made these observations while chairing a meeting on power sector at the Ministry of Water and Power on Thursday. Raja Pervez Ashraf said he had great hopes from the secretaries’ committee formed by the government to give recommendations to improve the power situation in the country.

The secretaries’ committee comprises of federal secretaries for finance, petroleum and water and power. He said the committee should ensure uninterrupted supply of fuel for optimal generation from power plants and also come up with doable suggestions to improve the entire energy chain from generation to distribution. The prime minister said the government had been subsidizing an amount of Rs 250 billion annually despite financial constraints, to reduce the burden on consumers. This subsidy works out on average to Rs 3.50 per unit.Unfortunately, this relief has not attracted the appreciation from the public, the prime minister observed.

He directed NEPRA to work out an upfront tariff for investors interested in alternate energy projects like wind and solar energy. This would help investors in making decisions to invest in this sector without going through complicated and complex procedures for seeking tariff in each case.The prime minister said there should be zero tolerance for those who did not pay their electricity bills. He directed the Ministry of Water and Power to redouble efforts to recover the outstanding dues so that the financial health of the sector could be improved. “The consumers making full payments should not suffer for defaulters,” the prime minister said.

The prime minister said after the NFC Award the provincial governments had a better fiscal space. He appreciated a proposal that the provinces should pool their finances and invest for the construction of hydel power projects. Earlier, the WAPDA chairman briefed the prime minister on various hydel power projects including Allai Khwar-Battagram, Jinnah Hydropower-Mianwali, Gomal Zam Dam-South Waziristan Agency, Satpara Dam-Skardu, Duber Khwar-Kohistan, Jabban Hydropower Malakand and Laraib HPP that have a total capacity of 487MW and would be inducted in the national grid by March 2013.The prime minister was also told that Tarbela Dam was likely to be filled soon while Mangla Dam had been filled to a level of 1,180 feet against a level of 1,230 feet. – PT

Endowment Fund to be used for free dialysis

Endowment Fund to be used for free dialysis