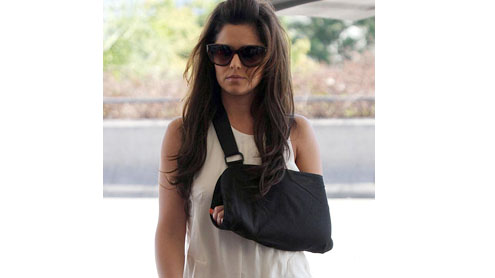 BATTERED Cheryl Cole revealed yesterday she got her bloody nose in a car smash going for a 3.30am McDONALD’S with Will.i.am.The singer, 29, flew back into Britain with her left arm in a sling.

Pals joked: “She had a Big Smack and Fries.”The Geordie singer told pals she was starving and on her way to get a late-night McDonald’s with producer pal Will.i.am when the shunt happened.She smiled through the pain and said: “I ended up having an Unhappy Meal instead”.Cheryl flew out of Los Angeles just hours after the crash with her left arm supported by a heavy-duty blue sling.She had not needed hospital treatment after the crash, suggesting it was provided by a private doctor.

The Sun told yesterday how the Girls Aloud star was in the front passenger seat of Will.i.am’s Cadillac supercar when it smacked into a parked motor at 3.30am.Our exclusive pictures showed Cheryl with blood pouring from her nose as she and the Black Eyed Peas rapper, 37, waited for the emergency services. A McDonald’s sign can clearly be seen in the background.A source said: “Both Cheryl and Will.i.am were desperate for some food after working all day in the studio. They only intended to nip out for a quick bite — but ended up staying up for most of the night.”

Cheryl was without her usual bodyguards as she walked through LA airport yesterday.Flight attendants fussed over her on the journey home and gave her extra pillows to rest her arm and head. They also gave her painkillers and water because she was suffering from headaches.
hen Cheryl landed in London, a wheelchair was waiting for her but it wasn’t needed.A friend of the former X Factor star said: “She is OK but still shaken about what happened.“She has seen the pictures in The Sun and can’t believe how much blood there was.“Everyone is just thankful she and Will are all right.

“Cheryl is home to see friends and family after what was a nasty experience abroad.“Her mum’s been on the phone and wants to come and see her as soon as she can.”It is still unclear what caused the accident, which followed “a long day and night in the studio”.Neither Cheryl nor Will.i.am have been questioned by police and there is no suggestion anyone was to blame for the accident.They both suffered a split nose and whiplash. Will was taken to Cedars-Sinai hospital, where he was later seen emerging wearing a neck brace and blood-stained jeans.

Cheryl — who was in Los Angeles rehearsing for her debut UK tour — was treated at the scene.They were both quick to assure fans they were OK. Using his favourite word, he said online: “Car accidents are not dope. I’m glad I’m OK.”He added: “We’re fine. Cheryl Cole (and I) were coming back from the studio but she and I are fine… just a little wiplash.”Cheryl — who is dating American dancer Tre Holloway — added: “Don’t worry. Me and @iamwill are fine, promise.”

Will’s manager Polo Molina also assured fans that the accident was “minor”.He wrote online: “Just spoke to @iamwill, everything is OK. He and Cheryl Cole are both fine. It was a minor fender bender after a long day/night in the studio.”Cheryl is now resting at her house in North London and will soon by joined by her boyfriend Tre.The LA-based dancer will be spending more time with her as they step up the seriousness of their relationship.A pal said: “Things with Tre are really hotting up and Cheryl wants him to move in. They’re giving it a trial run while Cheryl’s in the UK preparing for her tour.”Will.i.am — a judge on BBC’s The Voice — is expected to join the singer on the tour, which begins on October 3.  – Thesun