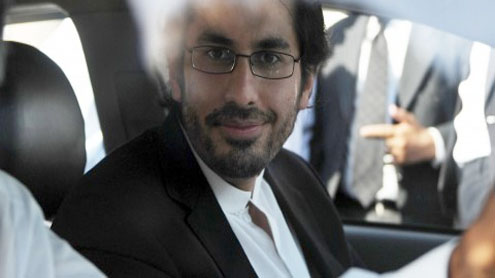 A two-member bench headed by Justice Jawad S Khwaja heard the case on Tuesday. Following media reports that Dr Iftikhar had received between Rs 300 million and Rs 400 million from Bahria Town owner Malik Riaz to influence judicial proceedings, the chief justice had taken suo motu notice and summoned Arsalan and the Bahria Town chief. Concluding his argument, Sardar Ishaq, Dr Iftikhar’s counsel, told the court that business tycoon Malik Riaz was an influential person in Islamabad and requested that a judge be tasked with inquiring into the allegations leveled against his client.

Taking a jibe at Ishaq’s statement, Justice Khilji Arif Hussain said if Ishaq did not trust anyone, the court should perhaps call someone from abroad. Responding to Justice Hussain’s remark, Ishaq said the National Accountability Bureau (NAB) was an objective organization, but the chairman of NAB could not carry an impartial investigation. Ishaq also presented proof of contacts between Attorney General Irfan Qadir and Malik Riaz. He said his client had no faith in the probe carried out by NAB, as it had played a biased role in the case.

In his counter arguments, Zahid Bukhari, who represents Malik Riaz, said evidence did not prove NAB’s prejudice. Speaking to reporters outside the Supreme Court later, Dr Arsalan Iftikhar said he wanted a transparent investigation that was “as clear as glass”. Complaining about the joint investigating team in the case, he said he had concerns regarding how the team was constituted and how the members were selected.

Dr Arsalan said Riaz’s son-in-law, Salman Ahmed, had falsely sent out a text message regarding him facing security threats in Pakistan and he (Arsalan) did not “even recognise Ahmed by face”. Riaz’s counsel Zahid Bukhari told reporters that lawfully, only NAB could hear the case, as all financial impropriety cases were being investigated by the bureau. – PT