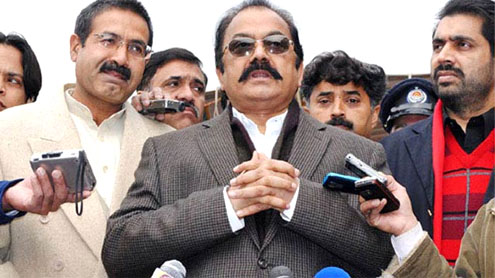 LAHORE: The Punjab Assembly unanimously passed a resolution on Wednesday rejecting a commission formed by the National Assembly speaker for the creation of new provinces out of Punjab, and calling for the formation of a new ‘national’ commission, Media reported.

The provincial assembly session Wednesday was the scene of much commotion and uproar for the third day of the week as the opposition lawmakers exchanged harsh words with the members of the ruling Pakistan Muslim League – Nawaz (PML-N). The PA’s sessions earlier this week witnessed similar scenes as opposition and government lawmakers chanted slogans and hurled harsh words against one another.Amid all the chaos, a resolution was moved by Law Minister Rana Sanaullah opposing a parliamentary commission formed by the federal government for carving new provinces out of Punjab. The resolution, which also calls for the formation of a new commission, was passed immediately by the assembly members.

“Today, the Punjab Assembly has rejected this ‘Zardari commission’ and demands that the National Assembly speaker and the federal government immediately withdraw this commission,” said Rana Sanaullah, speaking to reporters after the session. “The Punjab Assembly demands that a new ‘national’ commission be formed taking the provincial and national leadership into confidence.”Earlier on Tuesday, PPP Senator Farhatullah Babar was elected chairperson of the parliamentary commission in contention. The PML-N boycotted the commission’s first meeting which was held at the Parliament House on Tuesday.

The controversial 14-member parliamentary commission was formed by National Assembly Speaker Dr Fehmida Mirza on Aug 16 in pursuance of a message received from President Asif Ali Zardari and authorisation by the assembly on July 11.Her announcement named 12 members only, drawn from the two houses of parliament, and said two members would be nominated by the Punjab Assembly speaker.Inclusion of the three PML-N members in the commission had surprised and confused the party, and a day after its announcement, the PML-N accused the speaker of unilaterally nominating their party’s legislators without consultation.

Opposition leader in the National Assembly Chaudhry Nisar rejected the commission and called for raising his party’s representation to 50 per cent, contending that since the proposed body was meant only for carving two provinces out of Punjab, the PML-N must have a greater say by virtue of being the biggest party in the provincial assembly. He had also questioned inclusion of the MQM’s Dr Farooq Sattar, ANP’s Haji Adeel and JUI-F’s Maulana Abdul Ghafoor Haideri, saying their parties had no representation in Punjab. – Dawn