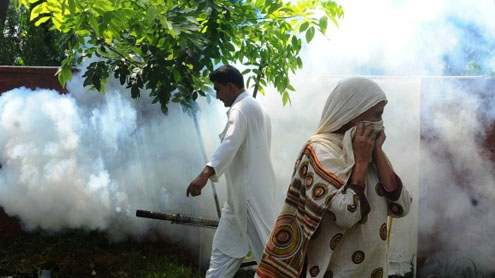 LAHORE: An anti-dengue campaign has been launched in the province, as part of which all offices remained open on Sunday and work on dengue elimination continued in the Punjab Civil Secretariat and subordinate offices.

All administrative secretaries supervised arrangements made for dengue eradication. Punjab Chief Secretary Nasir Mahmood Khosa personally monitored the steps being taken with regards to the anti-dengue campaign and reviewed all arrangements being made for this purpose.Separately, while talking to assembly members on Sunday, Punjab Chief Minister (CM) Shahbaz Sharif said that due to timely and effective steps on part of the government, the situation with regards to dengue was under control, adding that a vigorous anti-dengue campaign had been launched across the province.

He said that instructions had been issued to heads of all departments concerned to complete arrangements for dengue eradication on immediate basis. He said that no negligence would be tolerated in this regard and strict action would be taken against those found neglecting duty.The CM said that learning from the past year’s experience, the Punjab government had been vigilant from the very beginning this year and all departments concerned had been put on alert. He said that participation of elected representatives in the anti-dengue campaign was bound to yield positive results, as the situation demanded them to stand shoulder to shoulder with the people for their support.

He asked the assembly members to identify any and all shortcomings with regards to the anti-dengue arrangements, saying the shortcomings should be removed on emergent basis with help from the departments concerned.The CM directed that cleanliness arrangements be made and reviewed in both public and private educational institutions, the activity being monitored by the assembly members themselves.

Shahbaz directed the assembly members to review anti-dengue arrangements in graveyards, parks, and junkyards and monitor water drainage activities from low-lying areas with the help of departments concerned. He said that under-construction buildings were one of the major mosquito breeding sites, therefore, elected representatives should remove debris of such buildings from their respective areas.

Separately, Punjab Health Department’s Dengue Control Cell Training Manager Dr Nadeem Zaka addressed a seminar held in connection with the dengue awareness campaign at the Punjab Public Relations Directorate General. Officers and staff of DGPR attended the seminar. Dr Zaka said that collective and individual efforts were needed for controlling the dengue situation in the province, adding that dengue had become a social menace, eradication of which was only possible if each and every member of society contributed in the anti-dengue campaign.Dr Zaka provided information about dengue, its preventive measures, symptoms of disease and its treatment. He said that no vaccine of the disease has been developed in the world so far, hence, the best solution of the menace was to adopt timely preventive measures and check breeding of dengue mosquito.

Talking to party workers at his Gulshan-e-Ravi residence on Sunday, Punjab Assembly Deputy Speaker Rana Mashood Ahmed Khan urged all segments of society to cooperate with the government for eliminating dengue. He said that the government had taken all necessary measures against any possible outbreak of dengue and now it was the turn of every responsible citizen to come forward and support the government in its efforts against dengue. – Dailytimes

British parliament could shut for 5 years