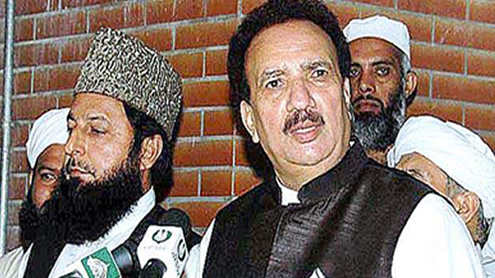 ISLAMABAD: Interior Minister Rehman Malik says there would have been many acts of terrorism if cellular service was not suspended in four cities of the country on the occasion of Eidul Fitr.

In an interview Thursday with Radio Pakistan, he said government had definite information about a conspiracy hatched to destabilize the country and designs of the enemies were foiled through effective coordination among intelligence and law enforcing agencies.  Replying to a question he clarified that government has no intention of blocking all unregistered SIMs immediately as it would cause inconvenience to users besides negatively impacting on revenue.  A meeting of all stakeholders would be convened to firm up strategy on how to deal with issue of SIMs issued against fake identity cards or in name of someone else.

He proposed SIMs should be verified against thumb impression of applicants through database of National Database & Regulatory Authority NADRA. SIMs issue would be resolved keeping in view foreign investment and interests of cellular operators. He said a mechanism would be devised to ensure that mobile phones are not used as tool for terrorist activities. On Naran tragedy‚ he said it was a terrorist act and not sectarian as those killed included both Shias and Sunnis. He said he talked to Chief Minister Gilgit- Baltistan on tense situation in area and he conveyed three demands of people which have been accepted. These include provision of police escort to passenger traffic for Gilgit- Baltistan; compensation to heirs of all those who lost their lives and increase in PIA flights. He said he asked PIA to double existing flights.

Gilgit airport would be upgraded to receive jet flights like Skardu. To another question, Minister said there is evidence of presence of Taliban in Karachi and action is being taken against them. About decision to form Interfaith Council‚ he said it would have seven members representing different schools of thought and its Chairmanship would be rotated among them on quarterly basis. It would be a model initiative and on its success it would be replicated in the provinces. A Conference on Interfaith Harmony would be held on August 30 to promote tolerance, ensure sectarian harmony and protect rights of minorities. On situation in Balochistan‚ he said it has improved following his detailed briefing to the Senate and exposing of activities of a neighbouring country.

He once again extended offer to estranged Baloch leaders to return to the country and talk to personalities of their choice. He said they should return to Balochistan if they are genuinely interested in serving people. Asked to comment on reported statement of Taliban spokesman that they would retaliate if operation was launched in North Waziristan‚ Minister said they do so at the instance of some one else. “It is known Maulana Fazlullah and Maulvi Faqir are operating from Kunar province of Afghanistan. It would not have been possible for them to carry out attacks on this side of the border‚ martyr our people and take back their own injured without active foreign support.

I ask Taliban to surrender arms otherwise government is determined to take campaign against terrorism to its logical conclusion.” On his recent telephonic conversation with Indian Home Minister‚ Rehman Malik said they talked about fast-tracking investigations into Mumbai attacks and SMS controversy. “I told my Indian counterpart that Pakistan is ready to take action if evidence was provided about involvement of anyone from Pakistan. I also extended invitation to Indian Minister to visit Pakistan.” -Brecorder

4th Round of Indo-Pak Parliamentarians Dialogue begins in New Delhi

4th Round of Indo-Pak Parliamentarians Dialogue begins in New Delhi