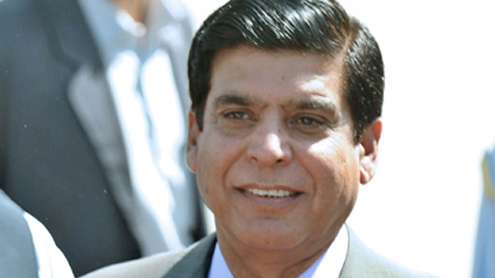 ISLAMABAD: Prime Minister Raja Pervez Ashraf Friday reiterating the commitment of the government to hold fair, free and impartial elections said only democratic system of government could ensure progress and prosperity in the country and provide strength to all institutions.

Addressing a function here at BISP auditorium to distribute financial assistance to the deserving people, the Prime Minister said, PPP being a national party believes in the power of masses and always came to power through power of vote. The Prime Minister said, “Holding fair, free and impartial elections is the only aim of the government for which the government has been taking all possible steps and the appointment of unanimously acceptable Chief Election Commissioner is a first step in this direction.” Raja Pervez Ashraf said the country’s destiny and future directly linked to democracy.

He said that directly elected representatives by the people, through a fair, free and impartial process of election could strengthen the democratic process and the institutions of the country. He said the country is heading towards fresh general elections and Chief Election Commissioner has been appointed in this regard while other measures are being taken as individuals do not matter and the only source of power and strength in the democratic system is the voice of the masses.

The Prime Minister said governments are not to stay for ever but the country will stay for ever as it belongs to all the Pakistanis and its right of every Pakistani that he will participate freely in the politics. He said the politicians should present themselves to the court of masses and the masses have the final authority to elect any one who then will have the power to rule the country and there should be no confusion at any level in this regard.

The Prime Minister expressed the firm resolve of the government to hold fair, free and impartial elections as the government has firm believe that decision to elect the future rulers should be done by the registered voters of the country and there should be no ambiguity in this regard. He said, “We are not against any one and will go to the court of the masses to seek fresh mandate”. The Prime Minister said BISP has been providing help and financial assistance to the deserving purely on merit and beyond any political affiliation. He said, “The welfare programme of BISP is above the politics and the deserving are being provided assistance on merit alone which has also be recognized at international level.”

He said Benazir Income Support Programme has become a role model for the rest of the world as a number of countries have approached to the BISP officials to start similar projects in their countries recognizing the success of this programme in Pakistan. Appreciating the dedication, commitment and impartial dealing of the staff of BISP headed by Farzana Raja, the Prime Minister said it has become one of the most successful programme initiated by the present government.

He said the vision and philosophy behind the BISP was to help those living below poverty line and help them to stand on their feet with the starting of small projects of their own. “The BISP has not only been recognized at local but at international level due to the policy of merit and fair dealing with the deserving people,” he added. The Prime Minister said those who deserve, the officials of the programme reached to them. He said it is Almighty Allah who had promised to give food to every individual but BISP has become a mode to fulfil the promise of God and providing food and basic needs to the deserving. He said it was blessing of God to PPP that it has been nominated as a mode to help the deserving people.

He said many such welfare programmes were initiated in the past by many governments but due to various reasons, these could not continued and expressed the hope that the BISP will continue as it is based purely on merit. The Prime Minister said the programme initiated in the name of Benazir Bhutto, was aimed to fulfil the needs of the deserving living below the poverty line and without any political interference. He said, “I can say that the BISP is a fair, and judicious programme serving the purpose to help the needy.”

The Prime Minister who came to the function after presiding over a meeting on Balochistan, said resolving the problems of this province is a top priority of this present government. Balochistan is the future of Pakistan and finding a resolution to this province is the most important factor for the government, he added. The Prime Minister said more than fifty percent population from Balochistan is getting benefit from BISP. He said similarly, over one million people are getting benefit from the BISP in FATA, adding that after the completion of poverty survey in September this year, this number will be increased.

The Prime Minister said BISP is one of the successful programmes of the country and it should be projected properly through media as a soft image of the country because the merit base polices of the BISP have been recognized all over the world. He said more than six million families are getting benefit from the BISP that included cash grant, insurance, waseela-e-sehhat, education and other basic needs of life. The Prime Minister said a new programme of providing eduction to over three million students will be started by the BISP with Britain and other countries which would help bring revolution in the country.

Earlier, the Chairperson Benazir Income Support Programme Farzana Raja speaking on the occasion highlighted the importance of the various projects of BISP. She said the assistance being provided through BISP has given identity to the people living below the poverty line, ensuring their self respect and empower them with dignity. She said through imparting vocational and technical training by BISP, the poor families are being supported to stand on their own feet. Later, the Prime Minister distributed certificate of Waseela-e-Rozgar, life insurance certificates and Benazir Debt Card among the selected groups of deserving people.-Brecorder