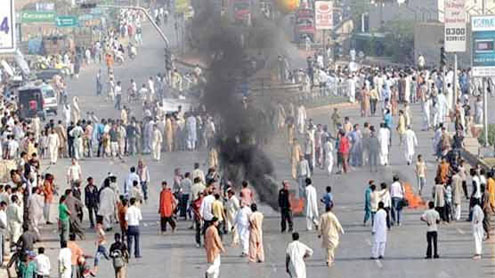 Meanwhile, government seems totally helpless in providing any relief to the masses during the month of Ramzan.

Despite claims it is becoming impossible for the authorities to implement government’s orders to end unscheduled loadshedding across the country.Due to the increase in consumption, the system is facing problems due to which transformers are not even working properly.According to National Transmission and Despatch Company Limited (NTDC) officials construction on Muzaffargarh transmission system was in last stage while electricity will soon be generated through Lalpir thermal power plant.

Meanwhile, protests were staged in different parts of the country against prolonged and unannounced loadshedding including Lahore, Peshawar and Mardan.In Mandi Bahauddin demonstrators protesting against loadshedding torched tyres and blocked the Sargodha-Gujrat road. Electricity supply has remained suspended since the last four days at Mubarakpur in Bhawalpur, while the citizens in sizzling heat during the holy month of Ramazan kept staging protest demonstrations to no avail.In Multan at Purana Vehari, people angered by protracted loadshedding burnt tyres and raised slogans against the government.

The duration of loadshedding has increased and reached to the level of 22 hours in Mardan.People of Mardan protested against the power outage they blocked the main road and suspended the traffic for long hours.In Charsadda the citizens pestered by prolonged unannounced loadshedding in several areas including Torangzai and Shabqadar came out on the roads and streets and staged demonstrations.

The protesters raised vociferous slogans against the government and staged sit-in which blocked the Peshawar-Charsadda Motorway near River Kabul.According to NTDC authorities, recovery work for Muzaffargarh electric supplied is in its final stages of completion. They said the electric supplied of Chashma and Lala Power Plant will be restored soon and situation would improve. – Dunyanews