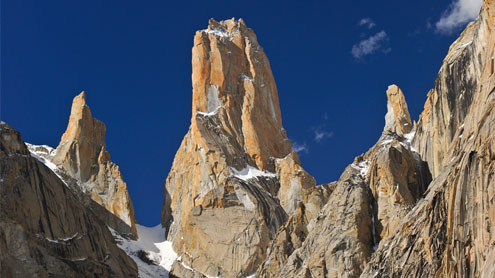 ISLAMABAD: Four Iranian climbers gate-crashed into the extreme climbers club — a status usually reserved for elite nations — when they reached the top of the Nameless Tower of the Trango Group, the Alpine Club of Pakistan (ACP) told Media on Sunday.

The Trango Towers are a group of dramatic granite spires located on the north of the Baltoro Glacier, in Baltistan. They are part of the Karakoram Range. The Towers offer some of the largest cliffs and most challenging rock climbing in the world. The highest point in the group is the summit of Great Trango Tower at 6, 286 metres (20, 608 ft).

According to ACP, Hassan Gerami, Hamid Reza Shafaghi, Abbas Mohammadi, Pejman Zaafari were also the first Muslims to reach on the summit of the tallest tower of the Trango Group. The climbers reached the top on July 14, at 3:00 pm.“Trango Towers Group has seen some of the most difficult and significant climbs ever accomplished. Because of the deadly combination of altitude, height of the routes, and the steepness of the rocks, the Trango Towers make a highly technical climb,” said Member ACP, Karrar Haidri on Sunday, explaining how the success was being cherished in Iran already.

In fact a 14 member team of rock climbers from Iran participated in the expedition. After the group encountered bad weather and challenges of vertical climbing, the climbers were forced to spend five nights, while barely hanging on to the cliff.“The leader of the expedition was very excited and felt proud, while informing about his experience,” said Secretary ACP, The team comprising of Hasan Gerami, Hosein Bolandakhtar, Abbas Mohamadi, Sed Saed Najafi, Mojtaba Saghafi, Saeid Mahmoodi, Hamid Shafaghi, Mehdi Farhadi, Ali Karimi, Pejman Zaafari, Farshad Meyjooji and Hamid Amiri had started their expedition on June 7, becoming a handful of climbers and mountaineers in the Karakorum, this year to summit a peak. ACP said the expedition took a different course known as the Slovenian Route that was a colossal hard climb and was as difficult as the other seven.“But their climb was neat and within schedule,” said Karrar Haidri.The Nameless Tower was first successfully conquered in 1976 by the legendary British climber, Joe Brown, Mo Anthoine, Martin Boysen, and Malcolm Howells. – Dawn

KP not serious in preparing youth for coping with disasters