Elections will be on time: Zardari 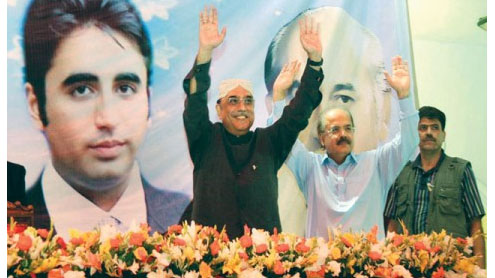 KHAIRPUR: President Asif Ali Zardari on Sunday said the next general election would be held on time and will be fair, free and impartial.

Addressing Pakistan People’s Party (PPP) workers at the residence of PPP leader Manzoor Wasaan in the DG Kot area, he said, “I want to make promise with the people that the next election will be held on time and will be fair, free and impartial.”The president said the PPP believed in democratic system and never used backdoors to come into power, therefore, it would depend on power of the masses and come into power with their support through fair, free and impartial elections.

Zardari, who especially went to meet the workers of the party in the remote area of Sindh, said the PPP never believed in rigging the elections, adding that all possible efforts would be made to ensure fair and free elections without any element of rigging. He said the PPP always believed in the politics of democracy and never used unfair means to come into power.The president expressed confidence that PPP would sweep the upcoming elections as it had served the masses, adding that all the four chief ministers would be from the PPP after the next general elections.

He said the PPP had a strong and ever-lasting link with the masses, who always extend their full support to the party to win the elections. The same strong bond of friendship between the PPP and masses would remain intact and with their support the PPP would again win the elections with a majority, he added.Referring to criticism on the present government, he said, “There have been conspiracies against our government but we have faced them with dedication and support of the masses.”The president said the government was being targeted through “TV politics” and some elements just criticised it without any justification in talk shows on different TV channels.

Commenting on politics in Punjab, he said that with the support of the masses the next chief minister of the province would be from the PPP. He said Punjab Chief Minister Shahbaz Sharif was in power only due to his kindness.The president said, “We are satisfied with our performance and are getting support from the masses.” Despite an international economic crisis and effects of economic meltdown, the economy of Pakistan had made progress during the tenure of the PPP government, he added.

He further said, “The country is now self-sufficient in food and exporting wheat as it was importing wheat when the PPP came into power four and half years ago.”Zardari said he knew that the people were facing problems like shortage of water, electricity and jobs, but claimed that the government had taken a number of steps that would resolve those problems in the near future. – Dailytimes