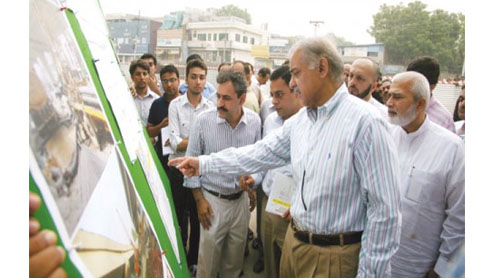 LAHORE: If the system functions properly, the problems of the people are resolved at the local level and they do not have to run from pillar to post for the redressal of their grievances.

These views were expressed by Punjab Chief Minister Shahbaz Sharif while chairing a meeting to review implementation status of decisions taken at the camp offices on Sunday.“Corrupt officers as well as those showing apathetic attitude to the people will not be tolerated. Government officers should keep the doors of their offices open for public and be polite to the complainants and spare no effort to solve their problems”, the chief minister remarked, adding that the decisions taken in the meetings at tent offices should be fully implemented.

The chief minister said eviction of cattle from the City should be ensured and a permanent system should be evolved for checking their reentry into the City. He constituted a committee and directed it to take immediate measures for handing over the state land for development projects so that there should not be any delay in the execution of uplift schemes.Shahbaz Sharif noted that activities of qabza mafia had become a serious issue as the mafia even went to the extent of occupying graveyards and educational institutions.

He said that qabza mafia and those exploiting the citizens in the form of parchi (receipt) system were a serious threat to the society and it was the collective responsibility of elected representatives and administration to rid the people of such exploitative groups. The chief minister directed the local government secretary to evolve a system so that no one could re-occupy the graveyards retrieved from qabza groups. Besides, he added, proper arrangements should also be made for ablution in graveyards. He said the elements blocking the roads deserved no leniency and the roads should be got cleared from such elements so that the people should not face any difficulty.

He directed to initiate work immediately for the setting up of 40-bed hospital in Jallo Morre and adjoining areas, construction of girls’ degree college, installation of tubewells, repair and reconstruction of roads and other development schemes. He also directed to start work on 60-bed hospital in Raiwind immediately.The chief minister announced abolishment of late fee for delay in obtaining birth certificate of a child and directed that the decision should immediately be implemented in the province.

Senator Pervaiz Rashid, assembly members, secretaries of various departments, heads of development institutions, Lahore Commissioner and DCO, DIG Operations and senior officers concerned were present in the meeting.Also, Shahbaz Sharif visited various parts of the City early Sunday to review development projects. He also inspected metro bus service project from Model Town to Shahdara.During a briefing at the office of the construction company near Azadi Chowk, the chief minister got the air-conditioners switched off and presided over the meeting in hot weather. The traffic was not interrupted during the chief minister’s visit. – Naction

Spy chiefs of US, Pakistan to meet on August 1-3

Spy chiefs of US, Pakistan to meet on August 1-3