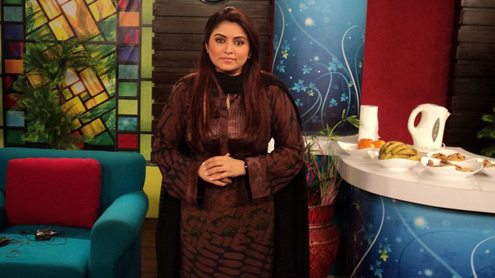 It seems all is kosher, nay halal, in the war of ratings between television channels. The month of Ramadan is a bonanza for religiously-oriented programming on the Pakistani airwaves and there is vigourous competition between television channels for higher ratings – and consequent higher revenues – in the holy month. It was en vogue this year to get controversy magnets – be they channel-hopping televangelists, on-the-radar starlets or date-busting anchors – to get as hosts.

Maya Khan – no stranger to stirring hornet’s nests – has become embroiled in a second controversy this year. Earlier this year, she was sacked by a television channel for chasing couples in a public park. She has now invited ire by having a Hindu boy convert to Islam live on television during a prime-time Ramadan chat show. This act has been widely panned as being a ‘ratings stunt’ and has sparked criticism on behalf of religious minorities in the overwhelmingly Muslim country. During the live transmission, in just five minutes, the 20-year-old Hindu boy introduced as Sunil officially changed his religion under a cleric’s guidance. A packed studio audience congratulated him and shouted out suggestions for his new Muslim name before he was renamed Mohammad Abdullah — the consensus choice.

Abdullah insisted on Friday that he had been a willing convert. “I have accepted Islam by my own will and my family has no objection,” he told AFP by telephone from the Ansar Burney Welfare Trust, where a staff member said he has worked as their office boy for the last six years. But Pakistan has been criticised by rights groups for showing an increased lack of tolerance towards religious minorities, who complain of discrimination, and critics blasted the show, broadcast by private channel ARY on Wednesday.

“The joy with which the conversion was greeted and the congratulations that followed sent a clear signal that other religions don’t enjoy the same status in Pakistan as Islam does,” wrote Dawn, an English daily, on Friday. “In a country where minorities are already treated as second-class citizens in many ways, this served to marginalise them even further,” it said. Ramesh Kumar, a leader of the Pakistan Hindu Council, told AFP that Wednesday’s programme would encourage intolerance. “We are already intimidated against. The government gives little heed to the kidnapping of Hindus and forced faith conversion of our girls. Please don’t do things that make us more alienated,” he told AFP.

Talat Hussain, who hosts a political show on private television channel DawnNews, also warned against turning religion into mass entertainment. “Think about how Muslims would feel when Buddhists in Burma show similarly a Muslim being converted in a live TV show,” he told AFP. Ansar Burney, a prominent human rights activist, former federal minister and former advisor to the UN and whose welfare trust the boy works for, has also publicly criticised Maya Khan and the television channel for broadcasting this “drama”. He has stated on Twitter, that he intends to file a law suit of 10 million sterling pounds against Maya Khan and the owners of ARY and that The Burney Legal Solicitors would send a notice soon in this regard.

Expressing his disapproval of the act, he tweeted, “Anchor Maya Khan again created dirty drama by inviting my office worker Sunil to her show without my permission to convert him Muslim.” Even though the converted boy has claimed that he has converted of his own free will, Burney said in this regard that the story that the boy had told him was ‘painful’. He tweeted, “My worker has full right of freedom but what Sunil told me is a painful story of Drama so I have to take action.” He further tweeted, “A person’s religion or change of religion is a deeply personal choice; and as someone under whose care Sunil has grown up, I am enormously disappointed at the way this whole matter has been used for cheap publicity.” In a country where the track record for minority protection and minority right is not that great, concern has been expressed on various fora that such public acts could contribute to further worsening the situation by fostering intolerance. Many commentators have also expressed concern about how religion is being com modified to an almost fetishistic extent by ratings-hungry show-runners without regards for its social fallout.According to Pakistan government figures, Hindus make up 2.5 percent of the nuclear-armed country’s population of around 180 million.  – PT