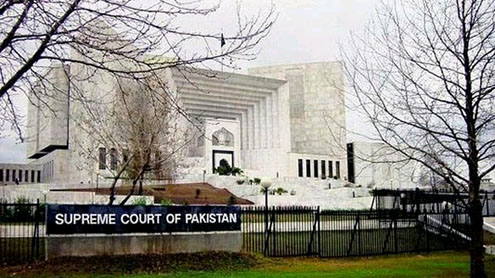 The government attempted a curious move on the eve of a potentially-decisive hearing for Prime Minister Raja Pervaiz Ashraf regarding the implementation of court orders in the National Reconciliation Ordinance (NRO) case.

As its reply, the government filed an application in court on Tuesday, in which the attorney-general argued that it was the premier’s “constitutional obligation” to disregard court orders that “negate the constitution.”However, the move was summarily shot down by the apex court.

A day ahead of the crucial hearing of the NRO implementation case, which is to be heard today (Wednesday), Attorney-General Irfan Qadir submitted a civil miscellaneous application asking the court to “recall” its fresh directives to Prime Minister Ashraf to write a letter to the Swiss authorities against President Asif Ali Zardari. The ‘request’ was supported by a litany of complaints against the proceedings of the implementation case, and challenging the court’s jurisdiction to direct the premier to write the letter.

After the disqualification of former prime minister Yousaf Raza Gilani, who was charged with contempt for non-compliance, his successor, Raja Pervaiz Ashraf, was also sent notices by the court on the same matter. First, on June 27, Premier Ashraf was given up until July 12 to inform the court of his intentions to follow its orders. On July 12, when his counsel argued that the new premier was awaiting instructions from the cabinet, the court gave a strong-worded warning, recalling the fate of his successor, Gilani. The court gave another date July 25 (today) for compliance, “failing which this court may initiate any appropriate action under the Constitution.”

But a day before the latest deadline, the government moved an application in court not only questioning the legality of the case, but also stating clearly that the premier could not implement the court’s order of writing a letter to Swiss authorities against President Zardari.

The attorney-general in the application said Prime Minister Ashraf cannot write the letter to Swiss authorities requesting them to reopen graft cases against the president without the cabinet’s approval. “…since the new Prime Minister has not received any such advice from his cabinet … he is, therefore, not obliged under the Constitution and the Rules of Business made thereunder able to do so.”Irfan Qadir further contended that the Court’s orders of 27 June and 12 July were not in accordance with the laws, rules, and Constitution, and were illegal, unlawful, and without jurisdiction.

The application called sections of the court’s judgment on the NRO un-implementable. “…in this case, over 8000 persons were condemned unheard … many portions of paragraphs 177, 178 and 179 were not implementable. In fact such portions have not been implemented till date.”However, in its summary dismissal of the application, the court turned down the request saying the reply had raised objections over court’s order of June 27 and July 12, and was more like a review petition. – Tribune