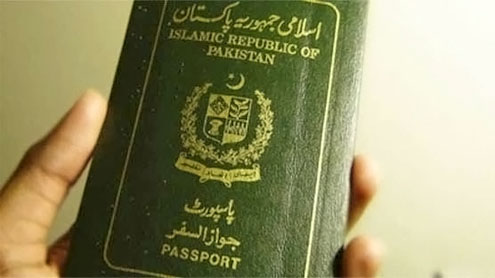 The team has been directed to complete their investigation within three days and arrest those responsible.The team consists of officials from NADRA, ISI and IB.Earlier, UK paper The Sun had claimed to unearth a fake Pakistani passports and visas scam in Pakistan.A major visa scam had been unearthed by a leading UK based tabloid, involving a ring of corrupt Pakistani officials and politicians which could give potential terrorists the chance to enter Britain with Pakistan’s Olympic team.

The investigation was centred on the Lahore-based Dreamland travel agency prosecuted nine years ago for human trafficking.“We infiltrated a crime ring offering false passports, visas and access to London 2012 as bogus support staff. We uncovered a ring of corrupt Pakistani officials and travel staff conspiring with a prominent politician to bypass stringent security,” The Sun, which exposed this scam, said.

The paper’s undercover investigator was first provided with a genuine Pakistani passport in a false name. Then leading Lahore politician Abid Chaudhry spelled out how for around 7,000 pounds he could get our man a two-month visa and smuggle him into London 2012 as part of Pakistan’s Olympic squad.The Sun secretly filmed Chaudhry as he explained how easy it was to get into the Olympic Village by masquerading as a member of the athletes support team.

“We were told we could even take part in Friday’s opening ceremony. At no point did any of the corrupt officials question our reason for wanting to sneak into Britain.“An investigation was underway yesterday after we alerted MI6, the Home Office, the UK Border Agency and the British High Commission in Pakistan’s capital Islamabad,” the paper reports. – Dunyanews

Punjab IG’s competence on the line

Punjab IG’s competence on the line