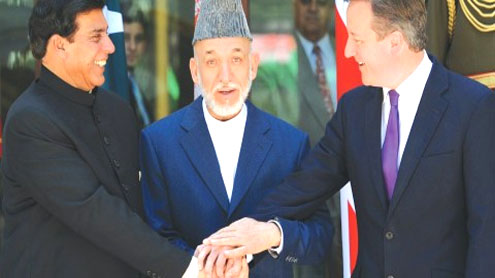 “Pakistan is playing the role of facilitator … If Pakistan can facilitate in any manner, we will do it,” Ashraf told reporters at Karzai’s garden palace in Kabul. “Let me assure you that Pakistan does not support any terrorists. It is not in our interest and we cannot afford it,” he said. Both leaders said Rabbani’s son Salahuddin Rabbani – who replaced his father as head of Afghanistan’s High Peace Council, the body tasked with reaching out to the Taliban – would travel to Pakistan for talks soon. It would be his first visit since his appointment in April.“The peace process is the most important of pursuits for Afghanistan. It remains the highest priority,” Afghan President Karzai said.

British Prime Minister Cameron, who signed a deal with Karzai to fund a new Afghan military academy dubbed “Sandhurst in the sand” following a visit to British troops in south-west Helmand province, said the Taliban could not wait out NATO. He also urged Pakistan and Afghanistan to join forces in the fight against insurgents in both countries, warning they must be “together in one single fight.”“The terrorists that are trying to wreck Afghanistan are by and large the same terrorists that are trying to wreck Pakistan. This is one fight that we all need to be engaged in,” Cameron said. Cameron warned the Taliban at a joint news conference with Karzai earlier that the international community would continue to support the Afghan government after NATO troops pull out in 2014.

“I think this sends a very clear message to the Taliban, that you cannot wait this out until foreign forces leave in 2014, because we will be firm friends and supporters of Afghanistan long beyond then. So now is the time for everyone to participate in a peaceful political process in Afghanistan.”Karzai said the peace process was “the most important goal that we pursue”, adding that Thursday’s talks were “to see how we could intensify the Pakistan role in the Afghan peace process”.Prime Minister Ashraf later met leaders of Afghan National Front and talked about issues relating to bilateral relations and peace and stability in Afghanistan. The Afghan National Front is an alliance of opposition parties in Afghanistan and is headed by brother of Ahmed Shah Masood, Ahmed Zia Masood. Ashraf said Pakistan was playing a prominent role for stabilizing Afghanistan. – PT