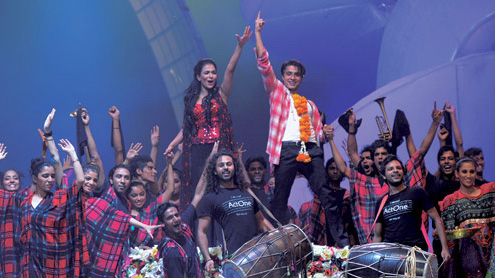 Pakistan celebrated its most prestigious and glamorous Awards show by honouring style and entertainment last week when the 11th LUX Style Awards were held in Karachi and saw some of the most exciting performances and tributes on stage.

Legends like Mehdi Hassan and Ahmed Rushdie were celebrated, a special appreciation award was announced for Emmy and Academy Award winner Sharmeen Obaid Chinoy, a much deserved lifetime achievement in Fashion Award was bestowed on Faiza Samee; and of course to the winners in the regular annual 26 categories encompassing Film, TV, Music and Fashion. These Lux Style Awards were all about being grander and more glamorous from the ones in the recent past. The host for the 11th Annual LSA was the hilarious and energetic Ahmed Ali Butt who was the find of the year as he was able to entertain the crowd each time he came on for the 5 hour long ceremony.

Each song had lead singers, star performers and glamourous chorus dancers which added a depth to the act and made each performance unique and memorable. Saima Azhar began the tribute as the Lal Pari from Ik Uraan Khatola Aye Ga, Meera and Faisal Quereshi (Yeh Adaa Yeh Naaz, Yeh Andaaz Aap Ka), Sana, Faisal and Ahsan (Socha Tha Pyaar Na Karein Gay) Mathira and Junaid Khan (Jaisay Jaantay Nahin) and the foot tapping Cococorina rounded up an amazing tribute to an era gone forever. The singers who sang the remixed Ahmed Rushdie classics were Bilal Khan, Sara Reza, Junaid, Ammanat Ali and Ahmed Jahanzaib. Acknowledgement tributes were also played out on stage for the best in class Emerging talent of young Pakistani musicians. The three performances that took place were Adil Omer, Ram Lal, and Noman Khalid. Each had creative choreography concepts with each performance that was fresh, energetic and kept the evening alive. All the choreography for this segment and the grand Ali Zafar Finale was done by the incredibly talented Hasan Danish of Act One.

Ali Zafar’s first performance was his tribute to Mehdi Hasan as he and his guitar sang the ever green, ever popular “Mujhe tum nazarr say girra tau rahay ho, Mujhe tum kabhi bhi bhula naa sako gay”. The audience was spell bound and many shed a tear for the old maestro so recently gone from this world and the young superstar who paid so soulful a tribute. For the grand finale to the 11th LUX Style Awards it was Ali Zafar and Umaima all the way as they danced up a storm on all of Zafar’s great new hits. From the beautiful Jhoom, to the London, Paris, New York numbers of Woh dikhney may and Ting a rang to the fantastically rousing and joyous Meray Brother ki Dulhan number Madhubhala, the paid brought the house down with the surety of their moves, their panache and pizzazz .-Pakistantoday