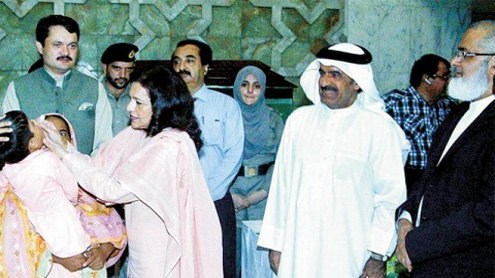 ISLAMABAD – As the three-day national polio campaign continues across the country, Bahrain’s Ambassador to Pakistan Mohammed Ebrahim Mohammad Abdul Qadir put his weight behind the effort by calling for the Ummah free of the scourge of polio.

Special Assistant to the Prime Minister Shahnaz Wazir Ali, and Malak Azmat, Minister of State for Inter-Provincial Co-ordination, were also present in a polio drops administration ceremony organized at the Pakistan Institute of Medical Sciences here Tuesday.  Addressing a number of mothers and media persons on the occasion, the Bahraini Ambassador said that the target of polio eradication has been achieved by all countries of Muslim world except Pakistan and Afghanistan. Pledging all-out support for the effort, he called for re-doubling the efforts including educating people on the hazards of polio.

He offered support in terms of sending ulema and scholars from Muslim countries to advocate for an ummah free of disability caused by polio.  On the occasion, Shahnaz Wazir Ali said that steps were taken to ensure that no child is missed during the three-day campaign.  She along with the Ambassador and Malak Azmat gave polio drops to children at the hospital. She reminded the mothers how essential it was for them to protect their children from this crippling disease.  Malak Azmat, Minister of State for IPC, said there was a need to reach every child with polio vaccine in all parts of the country.  He said there was a need to educate people and clear misconceptions on the issue.

According to officials during the National Immunization Days for polio scheduled from July 16-18 2012 across the country, a total of about 34 million children aged less than 5 years will be targeted with participation of 77628 house-to-house vaccination teams.  As many as 5702 transit vaccination teams will administer drops on busy bus stands and railway stations, airports and bazaars and 9702 fixed vaccination posts.  A total of 16914 Area In-charges and 3178 UC In-charges will supervise these vaccination teams. The WHO and UNICEF district and UC level staff will assist monitoring the activities in close collaboration with the DCs, DCOs and Political Agents.