Nothing but the Letter! 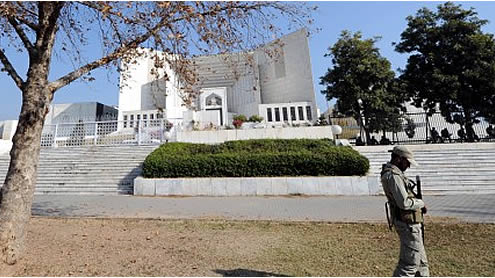 ISLAMABAD – The Supreme Court appears in no mood for rhetoric. It is no mood to allow the government machinery fiddle over its directions and allow the rulers make a mockery of its stature any longer.

Delays will not be tolerated. Going in for the kill, the Supreme Court on Thursday rejected a reply submitted by the attorney general of Pakistan on behalf of Prime Minister Raja Pervaiz Ashraf and ordered the PM to write the elusive letter to Swiss authorities for reopening the graft cases against President Asif Ali Zardari and submit a response by July 25. The five-Judge bench of Justice Asif Saeed Khan Khosa, Justice Ejaz Afzal Khan, Justice Ijaz Ahmed Chaudhry, Justice Gulzar Ahmed and Justice Muhammad Athar Saeed spared no pain while declaring that in case of the prime minister’s failure to implement its directive, the court could “initiate any appropriate action” under the constitution and law against the chief executive. The order said laws applicable to former prime minister Yousaf Raza Gilani were also applicable to the new PM, Pervaiz Ashraf.

The bench said Prime Minister Ashraf was “bound to implement the relevant directions of this court”, just like his predecessor, whom the SC dismissed on contempt charges for refusing to obey its order. The seven-page order, authored by Justice Asif Saeed Khan Khosa, said the judges were constrained to find it difficult to appreciate or accept the response of the PM. Citing previous orders, Justice Khosa referred to Article 248 of the constitution regarding immunity issue and said the issue was irrelevant to the contempt of court proceedings against then PM.

The bench said the judgment of the court in the Gilani contempt case had already “attained finality” as it was “never challenged through any appeal or review”. During the proceedings on Thursday, Attorney General Irfan Qadir apprised the bench in response to its order of June 27, that he had held a meeting with the prime minister, who said the matter had been taken up in the cabinet meeting held on Wednesday. Qadir said the cabinet had desired that the Law Ministry should furnish its views on the matter of implementation of the relevant paragraph of the SC judgment and once the ministry rendered its opinion, the cabinet would take a decision in accordance with provisions of the constitution. Legal wizards said the court order had left the clock ticking for the new prime minister, who might face a fate similar to Gilani’s. They opined that the court would not have to start contempt proceedings, as the previous proceedings of the court were not challenged by the government. Hamid Khan said the prime minister would be able to buy “some time” due to the proceedings. “I don’t see a decision coming on July 25 and the court may give some more time to the prime minister,” he said. Barrister Shahida Jamil said that the response submitted by the attorney general suggested that the government wanted to buy some more time, which might not be possible. – Pakistantoday

Judiciary can Judge Validity of legislative, Executive Actions on Constitution