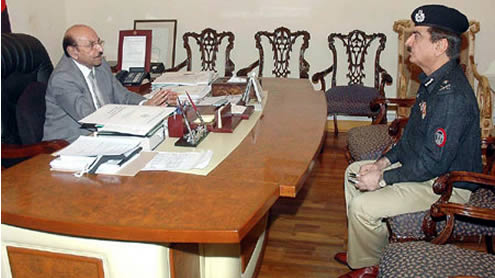 According to an official handout the chief minister while talking to IGP said that the maintenance of law and order is priority of the government and full efforts be made to restore the peaceful atmosphere in the province, particularly in Karachi, which is economic hub of the country. Shah said that it is prime responsibility of the law enforcement agencies (LEAs), particularly the police and Rangers to devotedly bring results, while the LEAs should take prompt action against criminals and anti-social elements on war footing manners.

He added that Ramazan is near and we have to adopt proper security measures, including patrolling of police force, manning in police security pickets and curbing the menace of bhattakhors and robbers. The CM also directed that the police department should brief the media and pressmen daily about the latest progress and achievements against criminals. He also asked the IGP to maintain prompt security arrangements at various trade centres, commercial bazaars, markets and mandis, particularly the wholesale trade area of the old city. The IGP assured the CM that round the clock security measures will be ensured and special measures will be adopted during Ramazan.

He also appraised the CM about security plan envisaged by the Sindh Police to strictly maintain law and order in the province, specifically in Karachi. – Dailytimes