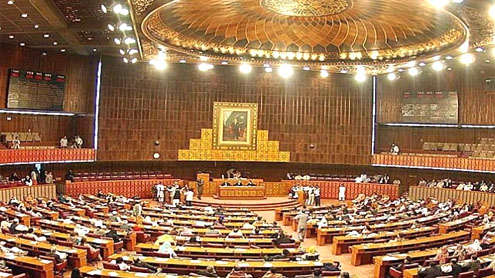 ISLAMABAD: Despite subtle hints by Chief Justice Iftikhar Muhammad Chaudhry that the Supreme Court would not compromise on its freedom and that it had the power to strike down any law repugnant to the constitution, the government on Monday went ahead and passed the new legislation on contempt of court, which makes ridiculing courts and defying its orders in an “appropriate” manner a piece of cake for the country’s rulers.

Amid loud slogans of “Kala Qanoon Na Manzoor” from the number-weak Pakistan Muslim League-Nawaz and PML-Likeminded, the Pakistan People’s Party-led coalition government got the Contempt of Court Bill 2012 passed with majority.Interestingly, the National Assembly also introduced another bill to raise the pensions for widows of judges by 75 percent – a measure described by a PML-N MNA as a bid to tempt and divide judges for ulterior motives.

Both the bills were introduced by Law Minister Farooq H Naik in the House.He had to face fierce resistance by the PML-N members while introducing the amendment bill to amend contempt of court law, but the government finally sailed through with the bill.However, a strong opposition by PML-N members created a ruckus in the House that was wisely defused by PPP ministers.

The PML-N again stood isolated as neither of the other opposition parties, the JUI-F and PPP-Sherpao, opposed the bill. Taking the House into confidence, Naik said the bill included the 1974 Act and the amendment made in contempt law during the PML-N chief Nawaz Sharif’s government. Under this bill, if remarks of any member are expunged by the speaker those remarks would not be quoted as evidence. Moreover, anything said against the armed forces and judiciary would be considered unintentional evidence and shall not be used as evidence. Referring to various constitutional provisions, the minister said the bill was meant for creating “balance”.

The decisions of the courts could not be discussed in parliament but there was no protection to the acts of the public office-holders, he asserted.He said parliament, executive and judiciary were three important pillars of our system and article 2A clearly explained that the state shall be governed by chosen representatives of the people.Naik said if protection was not given to elected representatives, how could the will of people prevail. “The acts of holders of public office in their official capacity should not fall in the ambit of contempt,” he maintained.

The minister said the government respected the judiciary and nothing was contained in the bill against the judiciary. “The PPP has always respected judiciary and we accepted the orders of the courts.” Referring to the death sentence to Zulfikar Ali Bhutto, imprisonment of President Asif Ali Zardari and cases against Benazir Bhutto, the law minister said, all aspects of the constitution were taken care of while framing this bill. He said former president Pervez Musharraf detained judges, but the PPP freed them. “We raised their salaries and are now planning to raise the pensions of judges’ widows from 50 percent to 75 percent,” he said.

“Actions speak louder than words. Gilani bowed his head to verdict of the court, he did not storm the court. But, if we respect them, they should also respect us,” he added. The minister said the constitution had been framed by parliament. “If the constitution is supreme and the Supreme Court is its guardian, then parliament is the one which created this constitution. Nobody can segregate a child from his mother and no one can be forced to respect the other.”Opposition members, including Khawaja Saad Rafiq, Khurram Dastgir, Kashmala Tariq, Muhammad Safdar and Zafar Baig Bhittani objected to the bill and called it a “black law” urging the government not to pass it.

They claimed that the bill would provide a license for abusing authority, make dozens of public office-holders sacred cows and undermine the authority of courts.Clarifying the statements of the members, the law minister reiterated respect for the courts and said the request to enhance pension for judges widows was made by Justice (r) late Abdul Razzaq Thaheem and Justice (r) Naseem Sikandar.The matter was referred to the government by the Supreme Court. Later, the bill was presented to the House which was adopted with a majority vote.

After the passage of contempt of court bill, Prime Minister Raja Pervez Ashraf assured the National Assembly that the government respected the judiciary from the “core of heart” and dispelled the impression that there could be confrontation between the institutions. “We all are Pakistanis and the Supreme Court is the supreme court of Pakistan and its sanctity is compulsory on all of us,” he said. The prime minister said the contempt of court bill would not obstruct anybody in dispensation of duties. Through this bill, the government did not desire making anybody “a holy cow” rather the bill would protect the right to appeal.

WALKOUT: The major opposition parties castigated the government’s decision to reopen the NATO supply routes, as the PML-N members staged a token walkout from the National Assembly session in protest against the government’s decision, calling it a violation of the decisions taken by parliament and its committee on national security. Speaking on a point of order, Sardar Mehtab Khan Abbasi demanded the government take parliament as well as the people of the country into confidence over the agreements reached with the US administration.

He also criticized the fact that the US secretary of state had made the announcement of NATO supply’s resumption even before the DCC. JUI-F chief Fazlur Rehman said the PCNS had taken six months to draft consensus recommendations which were also ratified by the parliament, but the government ignored all recommendations and opened the NATO supply routes.“When NATO supply routes were blocked, the government said it was decided in national interest. When they opened the routes, they again claimed it had been decided in the national interest,” he argued.

He said that the Pakistani nation had been disgraced by the wrong policies of the government.“There are voices being raised against the NATO supply reopening. We are not with the Defence Council of Pakistan (DPC) but we also are not against their demands … we don’t want civil war in the country but we will hold public demonstrations against the government’s decision on July 13,” he added. Aftab Sherpao called for a through debate on NATO supply routes’ reopening and said the US refusal to offer an apology was due to the weakness of the civilian and military leadership.

Ashraf on NATO supply routes: However, Prime Minister Raja Pervez Ashraf vowed to protect and preserve national dignity as well as respect of the parliament and other institutions.“The government is fully aware of national obligations and pride and has firm resolve to protect it.”“We have not hidden anything from the nation and will not do so in future. If there will be any MoU or agreement regarding war against terrorism, we shall place it before the nation,” he added in special reference to resumption of NATO supplies. He invited opposition to bring business on this issue and the government would welcome to discuss the matter in the parliament.

“We stood firm on our demand of US apology on Salala incident. Finally US tendered an apology and all US media reported it.” He said Pakistan desired a peaceful and stable Afghanistan.The prime minister congratulated the parliament, the parliamentary committee and the nation on selection of a consensus Chief Election Commissioner.“Fakharuddin G Ebrahim is a person who enjoys confidence of parliament and the people. His appointment as CEC will pave way for impartial and transparent election as desired by the nation.” – PT

’68 per cent of Balochistan households exposed to food insecurity’

'68 per cent of Balochistan households exposed to food insecurity'