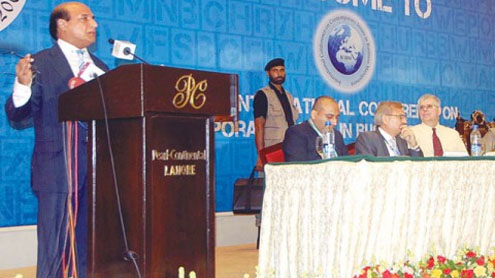 LAHORE:  Punjab Governor Sardar Latif Khan Khosa said on Wednesday that the judiciary would have to end its double standards.

Talking to the media at the ‘Second International Conference on Contemporary Issues in Business Management’, organised by University of Central Punjab, he questioned if parliamentarians could be sent home, then why not those holy cows who took two plots on submission of false affidavits.“The judges, after taking residential plots, submitted affidavits to the contrary,” alleged Khosa, adding that the judiciary overruled the National Assembly speaker’s ruling and removed the prime minister, but disallowed parliamentary debate on judges’ plots.

“If Arsalan Iftikhar loses 10,000 pounds in a night at Monte Carlo, is it also a PPP conspiracy?” he asked.The Punjab governor said the apology of the US over the Salala air strike was the victory of Pakistan’s stance and democracy. “The decision to resume the NATO supply was not made for the sake of money,” he maintained.Khosa said a democratic government blocked the NATO supply for more than eight months; otherwise, in the past, dictators took decisions on one phone call from the United States. “Afghanistan is our neighbouring country and it could not be left alone in difficult times,” he added.

The governor said despite economic crisis the government had given allotted funds to the Higher Education Commission (HEC), so that research activities did not suffer. “The universities should play their role as agents of change and focus on promoting research culture,” he stressed.Dr Charles L Martin, a professor of Marketing at Wichita University, USA, was the keynote speaker on this occasion. He focused his address on the role of technology in business, and stressed that education and training were vital in this regard.Lahore Chamber of Commerce and Industry President Irfan Qaiser Sheikh said that the economy of Pakistan had been badly affected by the ongoing energy crisis.

“Besides that, insecurity, corruption and natural calamities are the main reasons for the economic crunch in our country,” he added.Sheikh further said that it was high time that we found solution to the energy crisis and created business-friendly environment, which would increase investment in our country as well as boost our economy. University of Central Punjab Pro-Rector Dr Zafaraullah said the conference would provide an exclusive platform to researchers, academicians and professionals across the world to share their research contributions and experiences. “More than 300 participants representing different countries and from cross-business disciplines will meet and interact with each other in this dynamic event for future research directions and applied research needs,” he added. – Nation

No secret deal made with US: Hina