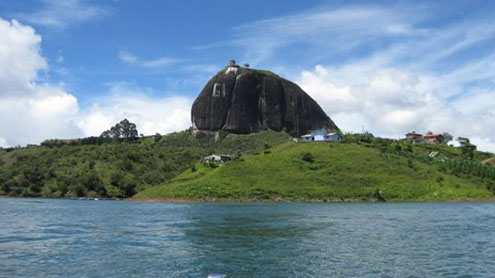 The giant Rock of Guatape, is a popular tourists’ attraction for all those adventurous people who want to discover the serenity at the top of a rock in Columbia.

The Rock of Guatape is a giant monumental rock which is situated in the town named Guatape based on the land of Columbia. Up till now, the Rock of Guatape has been ranked under the top travel by many adventurous tourists all around the world. It has been declared that the colossal rock is so far the largest monolithic rock existing and discovered by the mankind.  This rock can be viewed from anywhere from the countryside due to its massive volume and size.

Dimensions of the Rock of Guatape

The largest Rock of Guatape, a popular top travel for the tourists is almost 190 metres in height, 380 metres lengthy and 100 metres in width size. According to the geologists, the Rock of Guatape was formed some 70 million years ago. After that, the place became the hotspot for tourists’ top travel.

Challenge For The Tourists

The Rock of Guatape is vertical in shape. It is due to this distinct feature, the tourists find a great challenge to climb this rock as part of the adventure and fun. Back in 1954, the Rock of Guatape was scaled for the first time. It became popular after some locals made an effort to climb it within five days with the help of props. These props were sticks which are naturally embedded in the famous rock. With the time and discovery, a path was formed for the upcoming tourists. This path was in the form of 644 steps. The construction of these steps is to facilitate the tourists and thus it became a popular top travel for all.

View down the Rock of Guatape

This restaurant is the best spot which tourists find as it offers an outdoor sitting area for everyone. One can have eatables and drinks after climbing a great deal on the Rock of Guatape. On the top of these restaurants, tourists can go and check the gift shops that are available. This place will also allow the tourists to view the scenery which will provide the felling of tranquility around.

Route to the Rock of Guatape

Often tourists do a lot of research before going to such adventurous places. For the beginners who are interested in this top travel, check out the ferries that take all the tourists to this giant Rock of Guatape at the lowest possible rates. – Natasha Moeen

Under the knife 20 times to look pretty

Under the knife 20 times to look pretty