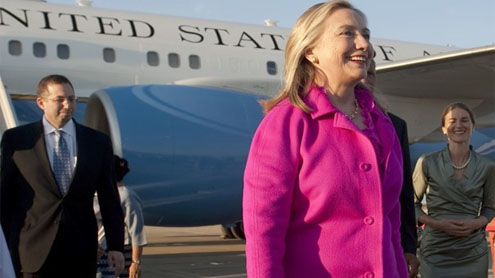 WASHINGTON: Pakistan on Tuesday announced it would re-open the supply routes to NATO forces in Afghanistan after US Secretary of State Hillary Clinton said Washington was sorry for the losses suffered by Pakistan Army in an errant airstrike last November 26 on a border checkpost along the border with Afghanistan.

The US had earlier refused to apologise for the mistaken attack – contending there were errors on both sides – but Clinton broke that impasse in a phone call with Foreign Minister Hina Rabbani Khar. “We are sorry for the losses suffered by the Pakistani military,” Clinton told Khar, a statement issued by the State Department said. “We are committed to working closely with Pakistan and Afghanistan to prevent this from ever happening again.” The deal re-opening the so-called ground lines of communication – GLOCs – also had face-saving gestures by both sides: Pakistan agreed not to increase its tolls for such shipments, and the US agreed it would not ship lethal aid via the routes unless it is intended for Afghan security forces.

But a US official asking not to be named told AFP that Washington will release about $1.1 billion to Pakistan as part of the deal. The money, from a US “coalition support fund” designed to reimburse Pakistan for the cost of counter-insurgency operations, had been withheld due to tensions between the two countries and Islamabad’s closure of the supply routes.The coalition support fund is often the subject of wrangling between US and Pakistani officials, with Islamabad’s claims often rejected and smaller sums approved by Washington for reimbursement. The $1.1 billion that will be freed up under the border deal does not include large sums that Pakistan says it is owed, said the US official, who spoke on condition of anonymity.

“This is the amount that has been approved and already gone through the process,” the US official told AFP. But Pakistan’s decision not to charge transit fee from the US raised many eyebrows in the country as Islamabad had been demanding a heavy tax on each NATO truck passing through the country. The US has termed the decision Pakistan’s commitment to peace efforts in Afghanistan.“I once again reiterate our deepest regrets for the tragic incident in Salala last November. I offer our sincere condolences to the families of the Pakistani soldiers who lost their lives. Foreign Minister Khar and I acknowledged the mistakes that resulted in the loss of Pakistani military lives.

We are sorry for the losses suffered by the Pakistani military,” Clinton said. The chief US diplomat struck a number of notes of interest to Pakistan in the statement, including respect for Pakistani sovereignty, enduring partnership, appreciation for Pakistani sacrifices and cooperation in trade and development areas. Pakistan’s Ambassador to the US, Sherry Rehman, who had been reaching out to American lawmakers to convey her country’s perspective on various issues, appreciated Clinton’s statement and hoped that “bilateral ties can move to a better place from here”.

“I am confident that both countries can agree on many critical issues, especially on bringing peace to the region,” Sherry said in a statement released by the embassy. “Today, as we announce the opening of the GLOC, I am glad that this breakthrough is not part of any transaction. We are playing our role as responsible global partner in stabilising the region.” Earlier in the day, the Defence Committee of Cabinet (DCC) in a meeting chaired by Prime Minister Raja Pervaiz Ashraf made the crucial decision of reopening ground supply lines of communication (GLOCs) into Afghanistan for NATO troops. Following the meeting, Information Minister Qamar Zaman Kaira announced the DCC decision during a press talk.

“Keeping in view the statement by US Secretary of State Hillary Clinton …. the DCC in principle has decided to reopen GLOCs … No transit fee would be charged against the NATO supplies as financial gains were never a consideration for Pakistan. Rather, we wanted the world community to respect our sovereignty,” Kaira said. A source told Pakistan Today that the DCC had decided to accept the US regret offered by Secretary Clinton despite the fact that Secretary Clinton did not use the word “apologise” – a demand Pakistan had been making as a precondition for NATO routes’ reopening.

The DCC also decided that no lethal cargo will go into Afghanistan through Pakistan except equipment for Afghan National Security Forces (ANSF) essential for ensuring peace and stability in Afghanistan. The DCC stressed that it was in Pakistan’s interest to support the transition and the peace and reconciliation process in Afghanistan, reaffirming Pakistan’s commitment to eliminating terrorism for the sake of a secure future for Pakistan.

The DCC also reiterated Pakistan’s stance on drones and agreed to continue to engage the US on counterterrorism cooperation and counterterrorism tools that were in line with international law and practice. Addressing the DCC, Prime Minister Ashraf said the continued closure of supply lines was not only damaging relations with the US, but also Pakistan’s ties with 49 other member states of NATO/ISAF. Pentagon chief Leon Panetta welcomed the move, saying the United States remained “committed to improving our partnership with Pakistan and to working closely together as our two nations confront common security challenges in the region”.

Sources said prior to the decision, ISAF commander General John Allen had held talks in Islamabad twice in the last six days, and offered a private and personal soft apology to Chief of Army Staff Gen Ashfaq Kayani, which the army chief had politely rejected, calling it insufficient. General John Allen also praised Pakistan’s decision to allow supplies to NATO forces. “I look forward to future opportunities to work together toward our common goals, by taking coordinated action against terrorists,” he said. – PT