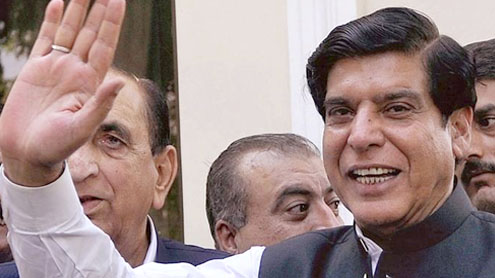 ISLAMABAD: After the failure of Yousaf Raza Gilani’s government to woo Baloch rebels to the negotiation table, the new prime minister, Raja Pervaiz Ashraf, on Monday called Balochistan resolution one of his top priorities, stating that he would soon visit Balochistan with a view to find out an “acceptable solution” of the problem after holding detailed discussion with all stakeholders, including rebels.

Addressing a meeting on Balochistan, Ashraf said Balochistan, electricity and good governance were his top priorities and would be pursued vigorously. Referring to the government’s amnesty scheme, the prime minister said the government had withdrawn many cases against political workers not involved in heinous crimes and a number of missing persons had been reunited with their families. “The withdrawal of army and deployment of

Frontier Constabulary brought tangible results. FC was directed to seek guidance/instructions from the Balochistan chief minister regarding internal security of the province,” he said. “I have invited the Baloch leadership for dialogue to address their grievances within the framework of federation,” he said. The prime minister directed the law minister to hold a meeting today (Tuesday) exclusively on missing persons which would be attended by the defence, interior and law secretaries, Balochistan Chief Secretary, FC IG, IB DG, ISI DG in Balochistan and Balochistan IGP.

He also directed the Ministry of Finance and Planning Commission to prioritize the projects in Balochistan having direct bearings on the people of the province. In this regard, he said projects of the road from Gwadar to Rato Dero, Kacchi Canal, RCD Highway, Solar Tube Well etc, should be given due consideration.“Let me categorically declare that Balochistan issue is on my priority list and I have invited disgruntled Baloch leaders to start dialogue with the government to resolve the crisis at the earliest. Bringing stability and prosperity in Balochistan would be the top priority of my government,” Ashraf said.

He said Balochistan was an important part of the country and because of its strategic location, the maintenance of peace was of utmost importance. The federal government was fully aware of the past excesses against the people and the province which caused a serious sense of deprivation, he added. “The Pakistan People’s Party has been seriously taking into account the factors resulting in discontentment of the people of Balochistan and continuing unrest here, since assumption of power.”

The government introduced Aghaz-e-Haqooq-e-Balochistan Package in 2009, which included 61 reforms proposals, in the categories of constitutional, administrative, political and economic matters.A cabinet committee under the chairmanship of Senator Raza Rabbani was also constituted to analyze the needs of the Balochistan and to very minutely review the situation and firm up its recommendations for reduction in the sense of alienation and deprivation. “The self-styled independence of federal agencies is being checked and it will be ensured that the federal agencies do not act independently in connection with law and order issue, but they should provide assistance to the provincial government in aid to civil power as and when required,” the PM said.

He said financing mega projects of Gwadar Ratu Dero Road (M-8), Kachhi Canal, Gwadar Deep sea port were accorded top priorities and the federal government had committed 6,000 scholarships for the youth of the province for higher studies within the country and abroad. “The federal government is especially focusing on establishment of vocational and technical centers at the provincial and divisional headquarters of the province. The government has committed an amount of Rs 1 billion for the rehabilitation of IDPs of Dera Bugti,” Ashraf added. “Although politically motivated activities are quite serious, the graph of conventional crimes in Balochistan is also on the rise. The government has sanctioned 3,000 posts of federal levies for maintenance of law and order duties and highway security in Balochistan. – PT