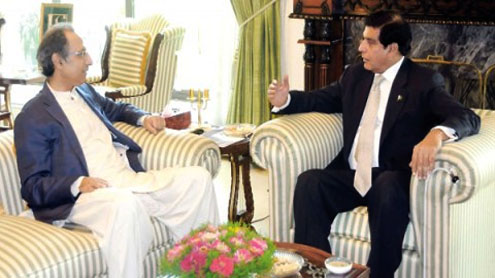 Ashraf was talking to an economic team headed by Finance Minister Abdul Hafeez Sheikh who briefed the prime minister at the Prime Minister House on the state of the Pakistan’s economy, the performance of key macro-economic variables during the fiscal year 2011-12 and the forecast for the new fiscal year starting from July 1.

The prime minister emphasized the need to focus on completion of projects in a regionally balanced way. He directed the economic team to make efforts to increase self sufficiency and increased revenue collection. He also said that provinces also needed to enhance their revenue collection to fulfill the needs of the people.

The finance minister informed the prime minister that the main areas of strong performance included continuing growth in GDP in spite of an adverse global situation, decline of the inflation rate to 11 percent from 20 percent last year, an extraordinary increase in tax revenue which had increased to Rs 1,800 billion so far, showing a growth of 23.4 percent on last year’s figure.

Sheikh said that the high growth of remittances, which would cross US$ 13 billion, would be at an all time high and would keep the economy of the country moving in the right direction. He added that exports were likely to repeat last year’s good performance in spite of a contraction in international demand.Sheikh further said that the successful utilization of public sector development programmes worth Rs 300 billion, completion of over 200 projects as well as subsidies for the poor including Benazir Income Support Programme (BISP) were some of the significant economic achievements of the government.

The finance minister said that public sector organizations continue to pose economic challenges along with the security situation in the country which deters investment. He also stressed the need for political stability.The meeting was also attended by the Planning Commission deputy chairman, Planning Division secretary, finance secretary, FBR chairman and senior officials of the Economic Affairs Division. – PT