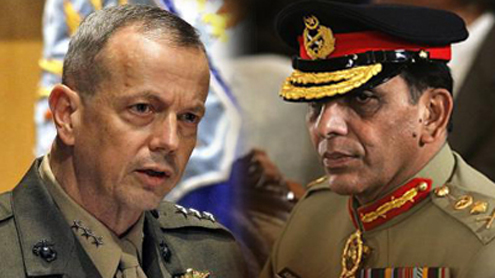 RAWALPINDI: The US commander in Afghanistan discussed border coordination with chief of army staff, General Ashraf Kayani on Wednesday.

General John Allen, who commands 130,000 NATO troops fighting the Taliban in Afghanistan, flew into Chaklala air base and went straight into the talks with General Ashraf Kayani at his Rawalpindi headquarters, before jetting out of the country, officials said.  There was no immediate comment from NATO’s International Security Assistance Force (ISAF), but a Pakistani official said Kayani demanded greater efforts from the Americans on stopping cross-border incursions.

“It was a routine meeting to discuss the border coordination,” a senior Pakistani military official told. “We also raised the issue of cross-border attacks on the Pakistan military from Afghanistan. We demanded that ISAF take action against the militant sanctuaries in Afghanistan and eliminate the militant groups involved in cross-border attacks inside Pakistan,” he added.  Pakistan said around 100 Afghan-based militants crossed the border into the northwestern district of Upper Dir on Sunday. Six soldiers were killed and 11 went missing. -Brecorder