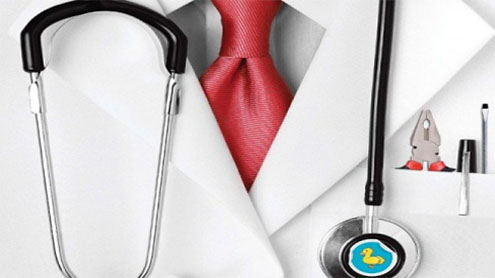 LAHORE: The Punjab government has finalised a plan to arrest active young doctors who are in the forefront of the strikes and protests against their demands.

According to sources, law-enforcement agencies have been tasked with preparing a list of young doctors who are active during strikes, and that the crackdown would soon begin.The four-year-long tussle between young doctors and the Health Department has taken the lives of dozens and made thousands of patients suffer, as treatment facilities were unavailable at public hospitals due to the strike, and they had no choice but to pay high fees of private doctors. However, this tussle continued in phases, giving little relief to the poor public.

Meanwhile, the same members of the Young Doctors’ Association (YDA) and other senior doctors are performing duties and offering services at private hospitals, and charging heavy amounts from patients whom they denied treatment at public hospitals.The young doctors’ protest and boycott of duties in outpatient departments (OPDs) for service structure continued on the 10th consecutive day, leaving the poor patients stranded in the absence of treatment services at public sector hospitals across the province.

The doctors’ strike in the OPDs, being observed on the call of the YDA Punjab, also affected the operations in the indoor wards and operation theatres (OTs), causing tremendous hardships for the poor patients.As a result, hundreds of thousands of patients are being left unattended on a daily basis.The strike is not something new, as doctors had several times closed the OPDs in the past.Besides the strike, the Health Department also refused to show any seriousness to resolve the doctors’ issues.

In July 2008, the YDA at Mayo Hospital started its first protest against the decision of six doctors’ dismissal over a patient’s death, and blocked The Mall for two hours, but the government immediately reinstated the doctors.In October 2008, doctors again protested against their salary package and the government raised their stipend considerably: medical officer (MO) from Rs 12,000 to Rs 18,000 and postgraduates (PG) from Rs 15,000 to Rs 22,000.

In January 2009, doctors launched a strike over the government’s order to ban their working in private hospitals, in which the government issued orders to arrest active doctors and register cases against them. The doctors again blocked the city roads and shut down the emergency wards of Services and General hospitals, which resulted in the deaths of three patients who were not provided treatment in time.

The Pakistan Medical Association (PMA) had also protested in July 2009 on the promotion of senior doctors.After the PMA protest, the government issued the promotion notification of 2,000 senior doctors. The YDA at Jinnah Hospital, after quarrelling with media persons in 2010, closed the emergency services for seven consecutive days. The chief minister settled the matter between doctors and the media.In 2011, the YDA launched another protest and took out rallies for increase in their salaries.

Doctors protested for 37 days in Punjab, 42 days in Balochistan, three days in Sindh and 17 days in Khyber Pakhtunkhwa.The government took action against the closure of emergency wards of public hospitals and arrested the active doctors. This countrywide protest also claimed the lives of several poor patients, who were denied treatment.

During the same period, the spurious medicine issue came to the limelight, which caused hundreds of deaths. On this, the Punjab CM dismissed the medical superintendent (MS) and other doctors concerned, who were later reinstated on the orders of the Supreme Court. The SC also ordered the Punjab government to announce the service structure of doctors, on which the health secretary assured the court that it would be finalised within six weeks.

Meanwhile, the government transferred 400 medical officers, on which the doctors once again announced a strike, and the government took back its decision.When contacted, YDA officials said that Rana Sanaullah and other high-ups had assured them in several meetings that the issues would be resolved, but no solution was brought out in doctors’ favour. – Dailytimes