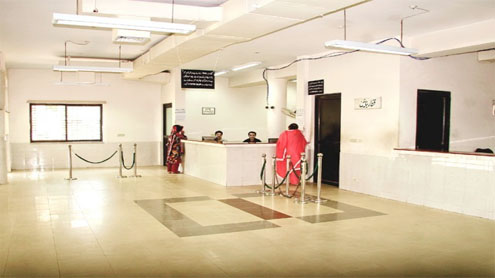 LAHORE: The Young Doctors Association (YDA) Punjab stepped up its campaign to press the government for better perks and allowances with a protest outside Sir Ganga Ram Hospital on Tuesday.

A paramedic who works at Sir Ganga Ram Hospital and who witnessed the protest said there were no more than 90 doctors present.Meanwhile the strike at OPDs continued and there were no discussions between the two sides on Tuesday. YDA spokesman Dr Nasir Bokhari said that the YDA had had no contact from the government since Wednesday, when the doctors presented their demands for the service structure and the two sides calculated how much they would cost.He said the doctors would not back down. “We are sticking to our plan. The government doesn’t care about the strike and we won’t budge an inch from our demands,” he said.

“It seems the government wants to drag out this issue like last year when negotiations didn’t start until the strike went on for 37 days. We don’t have a problem with that,” said another YDA office bearer.The Pakistan Medical Association (PMA) has called a meeting of all associations of doctors at the Lahore Gymkhana on Wednesday (today) to discuss a joint strategy for pressing the demands. “The meeting aims at brining all doctors’ associations under one umbrella on the issue of service structure,” said a PMA official.

Chief Minister’s Special Assistant on Health Khawaja Salman Rafique said that the government was trying to resolve the issue.He said that all government servants and all Pakistanis were suffering these days and the doctors should work through these hard times like everyone else. – Thetribune