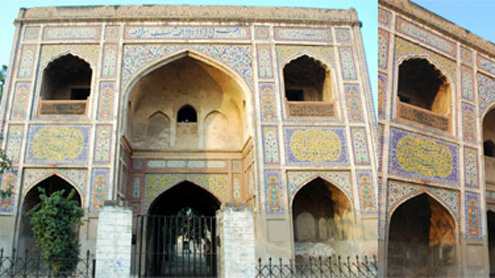 LAHORE: The 450-year-old Mughal era’s Dai Anga’s tomb is in shambles. This tomb is included in the national heritages’ protected monuments list, but ironically, it was never protected nor preserved; rather it was totally neglected by the departments concerned.

This scribe visited the historical monument and found it in a very poor condition. Dai Anga’s mausoleum was constructed in 1671 and is situated on the Grand Trunk (GT) Road adjacent to the University of Engineering and Technology (UET) behind the Gulabi Bagh Gateway. Dai Anga was the wet nurse of Emperor Shah Jahan and the wife of Murad Khan, a Mughal magistrate of Bikaner. She was also the founder of Dai Anga’s Mosque, one of the well-known ancient mosques situated in Naulakha area.

The main entrance from the roadside to Dai Anga’s tomb is about 14 feet in length. The entire front structure of this entrance is in a very poor condition; the floor of thin bricks is chipped. The structure has small hujras (common rooms) on both sides of the entrance, but the bricks from the walls and floors of these hujras have all disappeared. Once the entrance had beautiful tiles with mosaics work, but now the elegant patterns have faded.  The plaster on the upper portion of this entrance has worn off. About 200 feet from this main entrance is the graveside of Dai Anga, while between them is a ground, which is grassless due to absence of a gardener.

The ground, however, is nowadays accommodating encroachers; people have built big brick houses on the left side of the ground, without any fear of action from the authorities concerned. The grave is situated about five feet above the land, and people have to reach there by using a five-step stair. All the small bricks of these stairs are also broken, while the backside of the tomb has been turned into a dumping place. The mausoleum consists of a central tomb chamber and eight rooms around it and all the mosaic work on the walls of these rooms has disappeared.

There are two red-bricked graves inside the tomb; one of Dai Anga and the other of her daughter, Sultana Begum. Traces of bricks on the boundary of the graves could be seen, suggesting that the final resting places were once well decorated. When contacted, an official of the Archaeology Department said that from next month, all the historical monuments on the GT Road would be preserved and protected.-Dailytimes