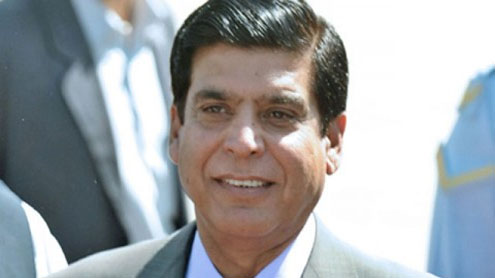 GARHI KHUDA BAKSH: Prime Minister Raja Pervaiz Ashraf took on his party’s detractors saying those who thought the democratic setup could be ended by ousting his predecessor have been proved wrong.

“Some people thought if he (Yousuf Raza Gilani) is sent packing, democracy can be ended. But you have seen the commitment of the people and parliament of Pakistan and those who are associated with democracy,” Raja said. “So if Gilani is not there, a PPP member from the workers’ class called Raja Pervaiz Ashraf is there,” the new PM said while interacting with reporters at the Bhutto family’s mausoleum in Garhi Khuda Bakhsh on Sunday. He contended that no force in the world could end democracy in Pakistan.

He said “an individual can be sent to jail or finished” but the ruling Pakistan Peoples Party’s philosophy will move forward and become stronger with time. The PPP is currently being led by President Asif Ali Zardari and in time, it would be led by his son Bilawal Bhutto Zardari, he added. Raja Pervaiz Ashraf was elected premier during a special session of the national assembly last week after Gilani was disqualified by the Supreme Court due to his conviction of contempt. Gilani was convicted and given a symbolic sentence of less than a minute by the apex court in April for refusing to reopen graft cases in Switzerland against Zardari.

Responding to question from the reporters, Raja said his party’s stance on writing letter to Swiss authorities was clear and they have already stated it publically many times. This clearly indicates the new PM is prepared to follow in the footsteps of his predecessor and face the consequence to save his party boss.He however said the PPP was opposed to politics of confrontation as it weakens institutions. “But we believe supremacy of the parliament is in best interest of the country… The parliament has to be strengthened… it is only through a democratic setup that we can strengthen democracy,” he added.

Raja said said improving law and order and addressing the energy crisis would be top priorities of his government. All capabilities will be used to control law and order and the energy crisis, he said. The PM also said that Pakistan wants good relation with the whole world but on the basis of equality.Ashraf further indicated that his government would continue the politics of reconciliation of his predecessor. “We respect all institutions and there will be no politics of conflict with any institution. We have even tried to take our political opponents along,” he said.

Prime Minister Raja Pervaiz Ashraf alongwith Sindh Chief Minister and federal ministers also inspected and reviewed the construction work being carried out at the mausoleum of the martyrs of the Bhutto family. The PM waved to the waiting crowd chanting slogans ‘Jeay Bhutto Sada Jeay’ and Zindha hay Bibi Zindah hay’ on his way back from Garhi Khuda Bakhsh. – Nation