Standing ovation for Gilani at ceremony 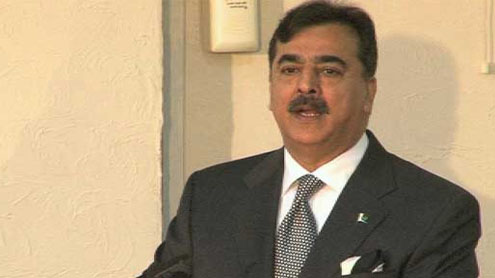 Standing ovation for Gilani at ceremony

ISLAMABAD: In a departure from usual practice, President Asif Ali Zardari made a brief speech after administering oath to new Prime Minister Raja Pervez Ashraf and members of his cabinet on Friday and praised the performance of former prime minister Yousuf Raza Gilani.

His remarks were greeted by those attending the ceremony at the Presidency with a standing ovation for Mr Gilani.The president said that detractors of democracy had long been hounding Mr Gilani and they hoped that the PPP and its allies would not be able to agree on a new leader of the house.This would give them a chance to send the parliament packing, said Mr Zardari. But they had been proven wrong.

He said the ultimate court was the court of the people and the ultimate verdict was pronounced by history. “The people and history will give their verdicts sooner rather than later,” he remarked.Referring to the election of Mr Ashraf as prime minister, he said: “The election of the new prime minister has come on the birth anniversary of our great leader Shaheed Benazir Bhutto and we have another reason to celebrate her birthday.” – Dawn

Quest: Why survival of the eurozone depends on leaders spinning plates

Quest: Why survival of the eurozone depends on leaders spinning plates