Premiership race: On election day, PPP keeps up the intrigue 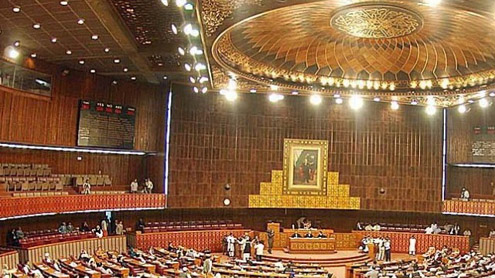 ISLAMABAD: Parliament will elect a prime minister today (Friday) – but with the previous frontrunner suffering a setback in the form of a non-bailable arrest warrant, the speculation surrounding who the Pakistan Peoples Party (PPP)’s top candidate continued on Thursday.

Late night reports suggested that former minister for water and power Raja Pervez Ashraf is the new frontrunner – but a formal announcement to this effect will be made by the party in a press conference just before the afternoon session to elect the next prime minister. With Thursday being the day for filing nomination papers, there were some surprises: The PPP brought in another backup in former information minister Qamar Zaman Kaira while the chief of his own Jamiat Ulema-e-Islam (JUI-F) Maulana Fazlur Rehman threw his name in the hat.

The entry of Kaira at the eleventh hour as a third candidate from the PPP has only increased the intrigue. Political hobnobbing continued till late night Friday as the leadership of the ruling alliance huddled in the Presidency to discuss the situation. The presidential spokesman said coalition partners announced their support to the PPP nominee. However, the meeting decided that the name of the PPP nominee would only be announced today in a press conference to be held by former religious affairs minister Syed Khursheed Shah.  The ruling PPP and its allies first submitted nominations for Makhdoom Shahabuddin and Raja Pervez Ashraf but later Kaira also filed his papers when a lower court issued arrest warrants against Shahabuddin for his alleged involvement in the ephedrine scam.

The sudden issuance of non-bailable warrants for Shahabuddin apparently weakened his prospects for the top slot. No official announcement was made by the PPP to withdraw his candidature. On the other hand, the main opposition party, the Pakistan Muslim League-Nawaz (PML-N) fielded Sardar Mehtab Abbasi as its candidate for prime minister, but the party’s attempts to garner any major political group’s support remained futile till late last night. Reservations against Ashraf? MQM sources said the party had conveyed reservations to President Zardari over the candidature of Ashraf, who is one of the main accused in the Rental Power Projects scam. The source went on to add that Ashraf and former interior minister Rehman Malik later met MQM leaders at Senator Babar Khan Ghauri’s residence to address the MQM’s reservations. An MQM later said that the party had no issues with any candidate.

Similarly, the PML-Q, who had earlier expressed concern over Chaudhry Ahmed Mukhtar’s nomination, was now wary of Kaira. Both Mukhtar and Kaira have been traditional rivals of the Chaudhrys of Gujrat in Punjab’s politics. With Makhdoom Shahabuddin apparently out of the running and Raja Pervez Ashraf’s unpopularity with some allies, PPP sources have said that Kaira, being a relatively “clean fellow”, has increased his chances. The sources said that the last minute induction of Kaira was a well planned move on part of the PPP leadership, which has always kept its cards close to its chest. Interestingly, except for a select group of close associates, no one knew whether President Zardari was going to field Kaira.

While allies and many members of the ruling party were busy signing and submitting nomination papers for Shahabuddin and Ashraf, Syed Khurshid Shah, in a surprise move, handed over nomination papers for Kaira to the speaker just a few minutes before the 2 pm deadline. Furthermore, the PPP could take advantage of Shahabuddin’s ouster from the race on account of court warrants by claiming that it was all set to give the key slot to this impoverished area (southern Punjab), but the judiciary barred it from doing so. According to PPP sources, once a new prime minister is elected, some important ministers will take oath along with him in the first phase, while others will be inducted later.-Tribune