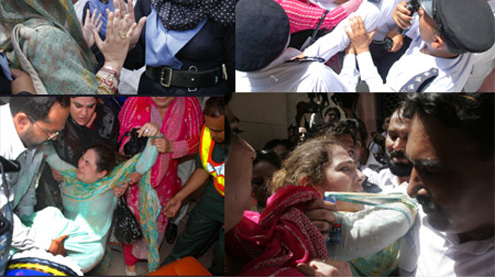 Long Protest Outside the Assembly gates

LAHORE: The Punjab Assembly remained a battlefield on the second consecutive day on Thursday, while the opposition’s woman lawmaker Seemal Kamran fell unconscious after a quarrel with security officials during her four-hour-long protest outside the assembly gates, as she was banned from the premises on the orders of the speaker.

Taking notice of Wednesday’s wrangling and show-lobbing, the speaker also suspended the membership of three legislators – Seemal Kamran, Sheikh Alauddin and Naseem Khawaja – for their non-parliamentary behaviour in the House, until the current session concludes. The PA session started around two hours late from its schedule time due to security reasons, as the assembly administration closed the entrance gates on the members following the verbal orders of the speaker to bar Seemal Kamran from entering the building. Only a few members sneaked into the House by using the side doors of the building.

Seemal reached the assembly at 11:30am to join the budget session. When she tried to enter the building, the tight security present there said that her presence had been barred by the speaker due to yesterday’s act of hurling a shoe at a treasury member, Sheikh Alauddin of the Unification Bloc. She demanded the security to show her the orders of the speaker, but the security said they were just verbal. Meanwhile, some other opposition members, including Sajida Mir and Hasan Murtaza, arrived at the assembly premises, and Seemal pleaded her case before them.

She again tried to enter the building with them, saying that according to the rules, no member could be barred from entering the assembly secretariat, even if the speaker had suspended his/her membership for the session. However, the security did not allow them in and closed the main gates of the assembly building, besides placing some barricades. The ban on lawmakers’ entrance heated up the situation and made them go ballistic. To condemn the act, Seemal, along with other opposition members, including Samina Khawar Hayyat, Khadija Umar Farooqi, Sajida Mir and Hasan Murtaza, lodged a protest in the stairs and chanted slogans against Chief Minister Shahbaz Sharif and treasury members Sheikh Alauddin and Zulfiqar Dhilloon.

She said that banishing her was illegal and discriminatory, and the government was taking revenge, for she had opposed the chief minister during his speech in the assembly. She alleged that Shahbaz Sharif wanted to pressurise her, but she would not leave her party and continue following her leaders, the Chaudhry brothers. On the occasion, Samina and Sajida said that they would move the court against treasury members for harassing and abusing women legislators. Meanwhile, Speaker Rana Iqbal, who was present in his chamber, held a meeting with the disciplinary committee to sort out the issue, and just after three minutes into the session, the administration issued written orders regarding Seemal’s suspension. On this, other opposition colleagues left her alone outside to join the session. They also decided to raise her issue in the House.

Soon after recitation of verses from the holy Quran and the Naat, Samina tried to take the floor, but the speaker gave the microphone to opposition leader Raja Riaz. Raja condemned the remarks made by Unification Bloc leader Sheikh Alauddin and Zulfiqar Dhilloon against women MPAs, as well as the role of the speaker. He said that the speaker did not make a right decision on the issue after releasing orders to suspend the membership of only PML-Q members, while the PML-N members, including Naseem Khawaja and Zulfiqar Dhilloon, were also equally responsible for the wrangling in the House. He warned that the opposition would not allow the session to run if the speaker did not do justice with their members. Soon after the speech, the opposition gathered around the speaker’s dais and started shouting slogans.

Treasury members also jumped in to save the day, and started hooting. Its members, especially Rana Arshad, Tahir Khalil Sindhu and Ghazala Rana, immediately covered the dais of the speaker and stop Samina from coming in front of the speaker. In response, Samina slapped Arshad on his face, on which he tried to toss a chair at her but other members stopped him. Meanwhile, Khadija Umar, who also tried to approach the speaker’s dais, was pushed back by treasury’s Ghazala and Sakina. Seeing an uncontrollable situation, the speaker adjourned the session for 15 minutes. When the session resumed, Raja Raiz on a point of order thanked the speaker for fulfilling their demand to suspend the membership of other accused members.

He informed the House that all the opposition members were going to join the blood bank established outside the assembly building to donate blood in connection with the birthday of the PPP’s assassinated chairperson, Benazir Bhutto, and they left the House passively. Taking advantage of the opposition’s absence from the assembly, the government benches one-sidedly approved the provincial budget for 2012-13, passing the finance bill along with some other seven bills. Later the speaker adjourned the session until today (Friday). The opposition members, after visiting the blood bank, tried to enter the assembly building along with Seemal Kamran from its main gates and side doors, but the security once again stopped them.

During the quarrel there, Samina and Seemal also slapped Punjab Assembly’s DSP (Security) Muhammad Maqbool and Women Police Station SHO Bushra. Meantime, due to weakness, Seemal fell unconscious and was rushed to Sir Ganga Ram Hospital in an ambulance, where she was under treatment until the filing of this report.
Later, women lawmakers, including Samina Khawar Hayyat, Sajida Mir and Khadija Umar Farooqi, reached the Qila Gujjar Singh Police Station and submitted an application for the registration of an FIR against Sheikh Alauddin and Zulfiqar Dhilloon, levelling allegation of harassment and abuse. According to sources, despite the demand of the opposition, the speaker had not suspended PML-N’s parliamentary secretary Zulfiqar Dhilloon, while Naseem Khawaja joined the session before issuing of the written orders. Khawaja later spent some time at the law minister’s chamber in the assembly secretariat.-Dailytimes

MQM to hold public meeting of Pushtuns on Sunday