Sindh sets aside Rs161.174b for development 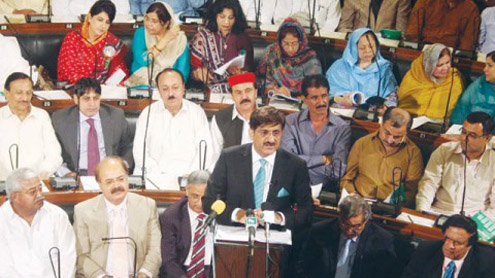 Sindh sets aside Rs161.174b for development

KARACHI – In line with the next general elections – due in 2013 – the PPP-led Sindh government has set apart a huge chunk of Rs161.174 billion for the next fiscal year’s Annual Development Programme, showing an immense increase of Rs50 billion from its uplift spending in the current fiscal year ending on June 30.

The provincial government, which has embarked on major development schemes with the federal government and foreign assistance, has allocated Rs161 for the ADP for the financial year 2012-13 as compared to the outgoing year’s Rs111 billion.Presenting the ruling PPP’s final budgetary document in the Sindh Assembly at an all-day budget session on Monday, Finance Minister Murad Ali Shah revealed that the total provincial development budget had been projected at Rs231 billion, registering a remarkable hike than the present fiscal year’s Rs155.86 billion.  “Of the total development outlay of Rs231 billion, Rs161 billion have been allocated under the next ADP, and a sum of Rs20 billion to complete ongoing uplift schemes of district governments. Under the development head, foreign donors’ share would be Rs35.657 billion and the uplift schemes to be initiated with federal grants amount to Rs14.516 billion.”

Of the Rs161 billion development outlay, around 70 per cent, Rs112.631 billion, has been allocated to as many as 1,288 ongoing schemes and Rs48.368 – 30 per cent – to new schemes. According to the finance minister, the funds released for development activities in the province stood at the mark of Rs122 billion that included Rs92 billion for the provincial ADP schemes, Rs18 billion for district development and Rs9 billion development expenditures outside the budget. Besides, he added, Rs11 billion were released in federal grants, while foreign project assistance stood at Rs22.84 billion. The amount spent on development activity, but booked as non-development expenditure was Rs7.3 billion. Minister Murad Shah claimed that with all these allocations and expenditures, development projects during the current financial year was recorded at Rs164 billion.

Contrary to the claims its finance minister, the Sindh govt reportedly the development side received measly 54pc funding of a total of Rs92 billion released so far in the outgoing year. Nevertheless, the government’s development initiative aims to offset poverty, create employment opportunities and improve public service delivery. The minister, however, added that the revival of production sector along with augmentation of physical, economic and social infrastructure would supplement the efforts against the growing poverty and rising unemployment. The portfolio amicably tackles historical inter-district differential in development through judicious allocations. Substantial allocations (70 per cent of the ADP) have been made to complete the ongoing schemes.

“This strategy would help complete 700 schemes during the next fiscal year starting on July 1,” said Murad Shah.Also, the government announced to initiate major schemes, such as the K-IV and S-III projects, Karachi circular railway, restoration/rehabilitation of the LBOD and Kotri drainage network, establishment of a multi-organ transplantation center at the Sindh Institute of Urology and Transplantation at a cost of Rs5 billion, provision of potable water and rehabilitation of the roads infrastructure.The government is also considering providing subsidy on essential commodities through the BISP in the next fiscal year.For the agriculture sector, a significant allocation of Rs13.69 billion, which includes ADP of Rs10.9 billion, has been proposed. The finance minister said the government remained committed to its “pro-farmer policies” for creating employment in on-farm and off-farm fields.After the heavy rainfall in 2011, the Sindh government designed a relief package of Rs2 billion for growers of affected districts.

Under the package, about 55,000-metric tonne of wheat seed, 23,000 metric tonnes of urea and 500 tonnes of sunflower seeds were provided to them. For promotion of mechanized cultivation, subsidy was provided on 6,000 tractors at a cost of Rs2 billion. During the fiscal year 2012-13, subsidy will be given for provision of 15,000 subsided tractors. In the next fiscal year, the Sindh Bank will manage agriculture credit line for small farmers at 7 per cent interest subsidy at a cost of Rs4 billion, with this year’s allocation budgeted at Rs2 billion. Subsidy assistance on agriculture implements for farm mechanisation (Rs 100 million allocation), Sindh On-Farm Water Management Project (allocation Rs740 million), and establishment of Agro Export Processing Zone for Fruits, Vegetables, flowers and allied Products would be initiated in the next fiscal year.

According to the budgetary documents, a huge amount of Rs7.5 billion has been allocated to the water and drainage sector. Development budget for other sectors includes Rs191 million for coastal development, Rs610.694 million for the Forest Department and Rs152 million for uplift schemes of the Wildlife Department. As per the documents, Rs1.369 billion have been allocated to establishment of industrial zones as well as to provide facilities to the existing industrial estates in the province. Similarly, a huge amount of Rs1.6 billion has been allocated to investment development, Rs490 million to uplift of the Sindh Mines and Mineral Department.The government has allocated Rs283 million to construction of small dams to offset the energy crisis.The Local Government Department has been proposed to be given Rs700 million development budget and the Public Health Engineering Department Rs3 billion for water supply and sewerage schemes, besides Rs121 million for the Katchi Abadis Department. -Thenation