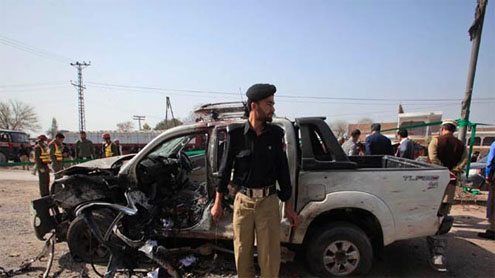 PESHAWAR: At least 14 people were killed and over 36 injured in a blast that took place in Peshawar on Friday, Media reported.

The blast occurred in the city’s Gulbela area on Charsadda road targeting a bus of government employees. The bus, travelling from Peshawar to the nearby town of Charsadda, was completely destroyed in the explosion.The injured which included three children were shifted to the nearby Lady Reading Hospital.

Police had cordoned off the site of the attack where rescue teams had reached and started their operations.No group claimed responsibility for the attack, but the Pakistani Taliban have carried out hundreds of similar bombings across the country.

Friday’s attack came one day after a remote-controlled bomb killed at least 16 people outside a seminary in Quetta.Pakistan sits on the frontline of the US-led war on al Qaeda and since July 2007 has been gripped by a local Taliban-led insurgency, concentrated largely in the country’s northwest.In the last five years, attacks blamed on militant bombers have killed more than 5,000 people according to an AFP tally. – Dawn