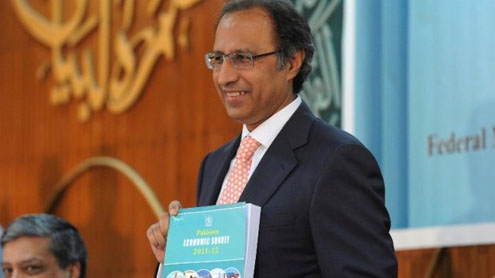 ISLAMABAD: It is a measure of just how bad the last three years have been: Pakistan’s economy grew at 3.7%, missing nearly all of the government’s own targets, but it was apparently enough for Finance Minister Abdul Hafeez Shaikh to claim victory in front of a nationally-televised press conference.

Announcing the publication of the Economic Survey of Pakistan 2012 in Islamabad on Thursday, Shaikh accepted that the growth rate was lower than anyone’s expectations, but refused to take any of the blame for the underperformance, choosing instead to blame the 2011 summer floods and a lack of foreign investment. Indeed, the minister felt that the government has done well, considering the state of the world economy. “This year is beginning of a good journey for the coming years,” said Shaikh, adding that, in many ways, Pakistan fared better than the world economy in 2012. Yet, within minutes, he also acknowledged that the power crisis had knocked off at least 2% from the economic growth rate, though he seemed curiously unwilling to take any responsibility for the near-constant power outages in many parts of the world. He was also shockingly dismissive of the violent protests against the electricity shortages breaking out all over the country. “Those people are not protesting against load shedding. They actually just want cheap electricity,” said Shaikh, referring to the protests that took place within Islamabad on Thursday. “The people taking part in these protests are not necessarily those most affected by the crisis.”

Yet, in trying to address what the government actually planned to do to solve the crisis, Shaikh revealed his own political weakness and party’s political compulsions. He said that the government needed to take several measures, including raising power tariffs, but that was something it could not do right now. In essence, the finance minister implicitly admitted that political compulsions ahead of next year’s elections were preventing him from making decisions in the national economic interest. Nonetheless, the minister did admit that the government needed to do better. “To create jobs for new entrants in the market, we need to have 5-6% growth rate, which is our medium term goal,” said Shaikh, in a line that may as well have been said by the man sitting to his left: Planning Commission Deputy Chairman Nadeemul Haq, a close adviser to the minister. Pakistan’s growth rate – while above much of the developed world – was well below its regional peers. India is expected to grow by 6.9%, Bangladesh 5.9% and Sri Lanka 7.5% this year. In real (inflation-adjusted) terms, per capita income grew only 2.3% during the fiscal year ending June 30, 2012. Pakistan’s per capita GDP went from $1,258 to $1,372.

Not a pretty picture Other economic indicators paint an even grimmer picture. Between July 1, 2011, and May 11 of this year, the government borrowed Rs1.1 trillion to finance its deficit, about 80% higher than the same period last year. Investment declined from 13.1% of the total size of the economy to 12.5%, the lowest in five decades. Foreign investment in the first ten months of the fiscal year dropped 48.6% to just $668 million. Pakistan’s foreign exchange reserves dropped from above $18 billion last year to $16.5 billion last month. Over the past ten months, the rupee has depreciated 3.4% against the US dollar, hitting record lows for the past three days in a row.  Blaming lobbyists and provincial autonomy  Yet, as with everything, the finance minister refused to acknowledge any responsibility for the problem and once again admitted his own political weakness. He said that the government was trying to implement austerity and a tight monetary policy to curb inflation, but was hampered in this effort by the relatively slow rise in tax revenues, which caused the fiscal deficit to keep rising.

“[Closing the budget gap] required an increase in tax collection, which is being resisted by powerful lobbies,” said Shaikh. In his own diplomatic style, he also blamed the 7th National Finance Commission award, which granted more fiscal autonomy to the provinces. “Around 65-70% of the resources are given to the provinces on the very first day of every month. The federal government is then left with only 30%, in which it has to oversee a lot of things including the defence budget, federal government’s expenses and loan repayments.”
Almost in the same breath, he made sure to praise what his cabinet colleagues have been proudly brandishing as the government’s single biggest achievement: “The provincial governments can directly help people and fulfil their needs.” -Tribune