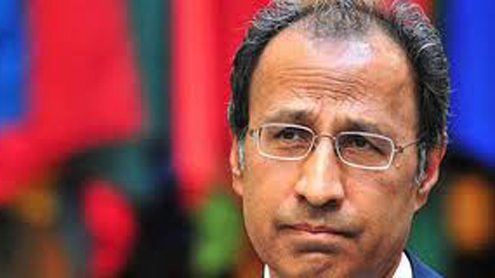 ISLAMABAD: The federal budget with an outlay of Rs 2.975 trillion for the upcoming fiscal year 2012-13 has been finalised, and will be announced on June 1.

The federal tax collection target has been set at Rs 2.338 trillion, including Rs 85 billion new taxes through broadening of tax base and administrative measures to generate additional revenues. The decision to increase the salaries and pensions of government employees has been left to the federal cabinet, however, a 25 to 30 percent increase in salaries and pensions is part of separate proposals. The share of debt servicing and debt repayment is set at Rs 933 billion in the 2012-13 budget. The federal government is to transfer Rs 1.427 trillion to the provinces in fiscal year 2012-13 as share in federal taxes, under the NFC Award, against the projection of Rs 1.245 trillion in 2011-12, showing an increase of 18 percent. Official sources informed Daily Times that despite fiscal year 2012-13 being election year, the government would continue fiscal consolidation efforts. The government is eyeing to contain fiscal deficit at just over Rs 1.2 trillion or five percent of the GDP for the next fiscal year. Provinces are set to create budget surplus to the tune of Rs 112 billion to help the federal government contain fiscal deficit at the projected level. Non-tax revenue target is also jacked up from earlier proposed target of Rs 562 billion to Rs 737 billion now.

The official sources said allocation for federal Public Sector Development Programme has been set at Rs 360 billion, and Rs 100 billion would be spent on development programmes outside the PSDP, making a total of Rs 460 billion for 2012-13 for development purposes. Allocation for subsidies has been increased from Rs 120 billion to Rs 150 billion for the upcoming fiscal year with main thrust on power sector subsidies, including subsidy for KESC and Rs 20 billion for fertiliser industry. The Benazir Income Support Programme would get Rs 60 billion to start new initiatives. Grants to provinces and special areas will have a higher allocation of Rs 60 billion in the upcoming fiscal year. Taxes: Income tax on salaries would be shifted from gross income to net income, and initial annual income of around Rs 375,000 would be exempted from this tax. The existing income tax exemption limit stands at Rs 350,000. The sources said further reduction in tax rates would encourage voluntary tax payments and tax collection would improve in the next fiscal year.

In the area of import tariff, the federal government has decided to make import regime investment and industry-friendly. Import duties on industrial raw materials and inputs would be drastically reduced. There is a proposal to impose 10 percent federal excise duty on alcoholic beverages and liquor in the budget, similarly, federal excise duty for cigarettes would be increased by five percent. To align the import regime with national tariff protection policy, the federal government is likely to announce constituting a high-powered committee to prepare tariff rationalisation plan within the next six months or before January 2013. The sources said that the Ministry of Industries has forwarded the latest tax and duty proposals to the government that also contain proposals for reduction in import duty on cars.-Dailytimes