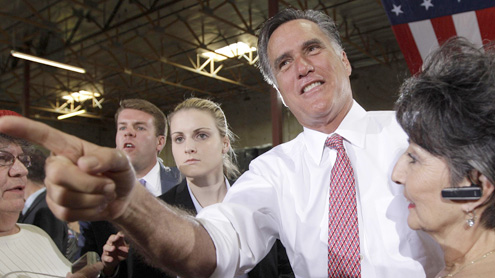 Mr Romney won 71 per cent of the vote in the Texas primary, inching him above the 1,144 delegates needed to secure his place as the Republicans’ presidential candidate. The former Massachusetts governor has been the de facto nominee since his last major rival, Rick Santorum, dropped out of the race in April and marked the milestone with only a simple statement, saying he was “honoured” and “humbled” at his victory. “Our party has come together with the goal of putting the failures of the last three and a half years behind us. I have no illusions about the difficulties of the task before us,” he said. “But whatever challenges lie ahead, we will settle for nothing less than getting America back on the path to full employment and prosperity.”

He was projected to win 88 delegates in Texas, giving a total of 1,174 according to the New York Times. His only remaining Republican rival, Texan congressman Ron Paul, won only 10 per cent of the vote. Mr Romney, a millionaire former private equity executive, made some history by becoming the first Mormon to lead one of America’s two major parties. Political analysts have long debated, without consensus, as to whether his religion will harm his electoral chances. His success was officially acknowledged by Reince Priebus, the chairman of the Republican National Committee, who will now swing the full might of the party to aiding Mr Romney’s campaign.

Mr Romney was not in Texas for his victory, instead attending a fundraiser in Las Vegas with Donald Trump, the property tycoon, and Newt Gingrich, his former opponent in the Republican primary. Mr Trump cast something of a shadow over Mr Romney’s victory with an angry on interview on CNN, where he repeated the conspiracy theory that the President was not born in the US and accused the media of falling for Mr Obama’s “reverse psychology”. “A lot of people don’t think it’s an authentic birth certificate. His mother was not in the hospital and there are many other things that came out,” he said, without giving any specifics. The exchange prompted Wolf Blitzer, the respected CNN anchor, to tell Mr Trump he sounded “a little ridiculous”. Mr Romney has repeatedly said he believes Mr Obama was born in Hawaii but has come under for fire refusing to condemn Mr Trump’s remarks.-telegraph