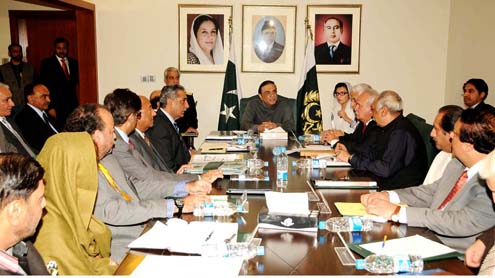 KARACHI, May 28 : President Asif Ali Zardari has called for constituting a task force of all relevant agencies for preempting about any untoward incident on the basis of intelligence gathering.

He also suggested for devising a mechanism for according prior approval of holding public rallies and also to decide whether some specific areas may be declared off limits for political rallies.This he said while chairing a meeting at Bilawal House on Monday where law enforcing and intelligence agencies gave a complete briefing on attack on a bus in District Benazirabad, firing on a rally in Karachi, murder of Muzaffar Bhutto and law and order in the province. -AssociatedPressofPakistan

Tags: Bilawal HousePresident for setting up of task forcePresident of Pakistan
Previous Post