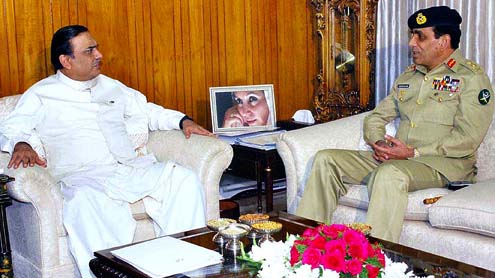 ISLAMABAD: In seemingly the first serious move to address the problem fuelling insurgency in Balochistan, the country’s top political and military leaders have decided to meet today to decide how to resolve the contentious issue of enforced disappearances.

To be presided over by Prime Minister Yousaf Raza Gilani, the meeting to discuss the missing persons’ issue will be attended by Army Chief General Ashfaq Parvez Kayani and other heads of federal and provincial law enforcing agencies. The enforced disappearances are primarily blamed on the country’s secret intelligence agencies including the Inter-Services Intelligence (ISI) with the issue tarnishing the country’s human rights credentials since 9/11. Premier Gilani told Geo News on Monday that his government was concerned about the rising number of missing persons and had called a meeting to find out how the issue could be resolved once and for all. Meanwhile, the Parlia­mentary Committee on the National Security (PCNS) began on Monday the process of preparing recommendations for the government to address this issue and called for legislative and administrative measures to rein in secret outfits.

During its last meeting, the 13-member bipartisan, bicameral panel decided to propose landslide amendments in laws governing the country’s anti-terror regime in a bid to address human rights violations. The committee, headed by Pakistan Peoples Party (PPP) Senator Raza Rabbani, sought a briefing from the interior ministry on the proposed amendments to the Anti-Terror Act of 1997 — seeking more powers for the military and intelligence agencies battling hardcore militants in the country’s tribal belt. The committee had already expressed concerns over giving intelligence agencies a ‘free hand’ to deal with suspected terrorists, fearing more powers would exacerbate the issue.

Pakistani military and intelligence services are often blamed for extra judicial killings, torture and enforced disappearances — some of these problems fuelling a nationalist insurgency in Balochistan. Senator Rabbani said these issues were undermining the government’s political and administrative initiatives to win back the loyalties of Baloch separatists for Pakistan. The head of the committee said the panel would have a briefing on anti-terror laws later this week to start the process of reviewing them. The committee has decided to forward the government two separate sets of recommendations, legislative and administrative, to sort out one of most complicated human rights issues facing the country.

A participant of the meeting told The Express Tribune that the panel has decided to toughen laws not only to bring intelligence agencies under civilian control but to also ensure that the detained terrorists do not escape because of weak prosecution or lack of evidence. On the administrative side, he said, the committee would recommend how provincial governments should take certain measures to address the widespread anti-state dissent in Balochistan and Khyber-Pukhtunkhwa. The decision to amend laws to control intelligence and law enforcing agencies came days after the Supreme Court observed that the Frontier Constabulary (FC) was behind almost 90% of the enforced disappearances in Balochistan.-Tribune