by top3
in Balochistan, Pakistan
0 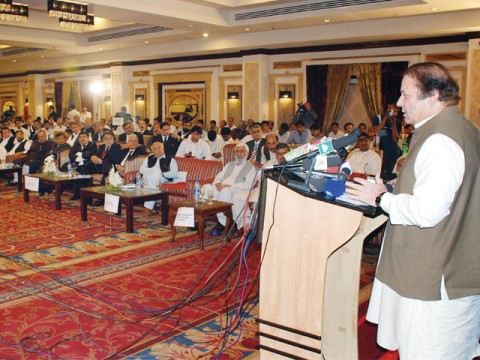 ISLAMABAD – A declaration by a national moot on Balochistan Saturday expressed grave concern over the presence of Frontier Constabulary in Balochistan, saying that multiple intelligence agencies have not brought peace in the province. Instead, blood is being split every single day.

Speakers at this SCBA organised conference on ‘Balochistan Issue and Its Solution’ called for urgent measures for the resolution of the Balochistan issue and to remove sense of deprivation among the people of the province. They also called for ceasing all military operations in Balochistan. The Supreme Court Bar Association (SCBA) organised this conference in the backdrop of growing number of missing persons and most tragically mutilated bodies of those who went missing and later their bodies were dumped in broad daylight. Expressing their views the prominent leadership of various political parties, intellectuals, civil society members, opinion makers and senior lawyers stressed for taking on board all segments in the province over all policies and development projects, besides redressing their genuine grievances. After daylong speeches, the participants passed a 15-point declaration demanding that politics of garrison should be replaced by a purely civilian-led administration that genuinely represents the will of the people and all military and para-military operations should to be stopped forthwith and the army and frontier constabulary be called back to cantonment. It also said that a number of FC personnel and police officers have also lost precious lives in the unrest whose sacrifices should also be acknowledged. The declaration also demanded that all those responsible for authoring and killing of Nawab Akbar Bugti should be arrested and brought to justice in an open trial. An inter-parliamentary committee should prepare a White Paper on the human rights violation carried out in Balochistan during the Musharraf regime to the present day. The report should be presented and discussed in the parliament. A rigorous training programme should be given to the FC and the police for respecting human rights of the people of the province. The FC should be strictly prohibited to go beyond their scope of work and warned not to act in an illegal manner.

The participants commended the Supreme Court of Pakistan for taking up the case of missing people in Balochistan but urged that those accused of heinous crimes of killings and disappearances should be brought to justice. The declaration said all political prisoners and missing persons in custody of different state agencies be released forthwith and an Independent Inquiry commission be appointed and appropriate compensation be paid to all those who have lost their lives/ or have become disabled on account of conflict situation. The participants emphasised that the Balochistan crisis was one which could only be resolved through political dialogue, negotiations and through building confidence between the people of Balochistan and the federal government. They demanded that it should be ensured that all natural resources in Balochistan are under the control of the people of the area, while peaceful negotiations continue to meet new challenges. The declaration said that sectarian deaths have occurred in vast numbers. Hindus are being kidnapped for ransom and 20 per cent of the Hindu population of Balochistan have left the province. Settlers in Balochistan have either left or live in fear, as many have been victims of target killings. The state of governance in the province is non-existent and thus social sectors have suffered immensely. A concerted effort should be made to respect the economic, ethnic, linguistic and cultural rights of all those living in Pakistan and in particular of the Baloch nation. “This consultation recognises that diversity of cultures in the country and aspires to celebrate it rather than oppress it. All those citizens of Pakistan, who are long settled in Balochistan, irrespective of their language, caste, or creed, be equally respected and their social and economic rights be protected. All religious leaders of different sects should commit themselves to create the culture of tolerance and religious harmony respecting each other’s beliefs and ideological thoughts.” “This consultation calls upon political parties to play a proactive role in promoting a democratic culture in Pakistan. Towards this end political parties may consider signing of yet another Charter of Democracy, so that they may gain the confidence of the people and play a leadership role rather remain resigned to the status quo. This consultation strongly pleads for a peaceful transfer of civilian power. Political parties must ensure that the forthcoming elections should be held in a fair, free and transparent manner. Political parties are urged to rise above personal interests and setup a genuinely neutral electoral mechanism.”  major political parties including, Pakistan Tehreek-e-Insaaf, Awami Nawal Party and Muttahida Quami Movement The leadership of all the political parties was unanimous that solution of Balochistan crisis lies only in the dialogue therefore military intervention in the provincial affairs should end immediately. They said the issue should be resolved without further delay.

Speaking on the occasion Pakistan Muslim League-Nawaz (PML-N) chief Nawaz Sharif said that atrocities and injustices turned the Baloch into insurgents. Bugti’s killers should be brought to justice; this is the starting point for giving relief and relaxation to the people of war-torn areas where bloodletting has become hallmark of the day, he said. Unless and until, the killers of Nawab Akbar Bugti are brought to justice, the restoration of peace was impossible in the province. Nawaz lamented that Pervez Musharraf was accorded guard of honour when he left the presidency and nobody dare hold him accountable. “We should hold responsible ourselves instead of passing the buck. We should not be complaining of Baloch being rebels.“ He said there was no benefit of Balochistan package offered by the government.  Pakistan People’s Party (PPP) senior leader Raza Rabbani proposed that in the missing persons cases there should be grand alliance between judiciary and parliament. The judiciary oversee the strict adherence to the fundamental rights of people, while the parliament oversee the transparency in the working of the security apparatus. The PPP leader said that Balochistan is the story of human rights violations, state neglect, exploitation of resources, deprivation of political, economic and cultural rights of the Balochistan people. He stated that he believe in DRA i.e. Dialogue, Rule of Law and Autonomy. He opined that the dialogue should be held with all the forces that remain within the framework of state. He if autonomy is given to provinces, the country would prosper. He said over the last 65 years consistent efforts have been made to malign the civilian governments and slander the political parties that they are inept, corrupt and not able to run the government. Pakistan Tehreek-e-Insaf Chairman Imran Khan opposing the military operation stated that situation always worsened in the military operations. He suggested offering unconditional amnesty to all Baloch leaders and initiation of political dialogue. Expressing concern over the poor economic condition of the province, he said that Rs110 billions were given to Balochistan government in NFC award but it could not be utilised properly as every member provincial assembly was given Rs500 to 600 million development fund. He opposed giving funds to politicians saying that development was job of the local governments. Imran said if the political parties had no courage to take decision on Balochistan issue, they should resign from assemblies and go for fresh mandate.

Qazi Hussain Ahmed, former Amir of Jamaat-e-Islami, was of the opinion that a society could not survive without justice and enforcement of constitution could ensure all fundamental rights and provincial autonomy. He said the rights of Baloch people over natural resources should be fully acknowledged. Afrasiab Khatak, senior leader of Awami National Party, welcomed the civil society and lawyers for debating the Balochistan issue. “In, the past, whoever demanded provincial autonomy he was declared as traitor but this trend has changed,” he said. Haider Abbas Rizvi, MQM leader said that Baloch people must be brought into mainstream politics. All political parties should persuade the Baloch people to participate in the next general election; otherwise, it could be declared referendum against Pakistan, he warned. He said that MQM was in favour of full provincial autonomy under 18th amendment. He also urged the media to highlight the Balochistan issue because no one was really aware of the ground situation there. General Secretary of Pakistan Muslim League-Q Mushahid Hussain said the province enjoyed an important strategic position in the region which had wider impacts on the neighbouring countries. “There is a need to change the mindset. Instead of a strong centre, strong provinces can guarantee a stable Pakistan,” he added. Mushahid emphasised ensuring right to life, which was the basic fundamental right of all citizens, and called for putting the house in order. He said, being the larger federating unit, the issue of missing persons should have been raised by the Punjab.

The PML-Q leader suggested that all political prisoners should be released and dialogue with disgruntled elements be held for permanent peace in the province. He also praised Chief Justice of Pakistan Iftikhar Muhammad Chaudhry and the lawyers’ community for taking the initiative over the issue and assured that all political parties would be standing behind them.
SCBA President Yasin Azad said the solution of Balochistan problems was not in taking suo moto actions because the court could only recover the missing persons. “The political parties have the solution to overcome hurdles being faced by the Baloch people as they are elected representatives of 180 million,” he added. He said the purpose of the conference was to give proposals for betterment in the province and to send a message to the community that the whole nation was with them and felt their pains. Asma Jahangir, former SCBA president, remarked that solution of Balochistan issue was vested with the political parties and they should take immediate initiatives in that regard. She also found solace in holding of free and fair elections under the supervision of an independent Chief Election Commissioner (CEC). The commissioner should be free from all outer and judicial influences, she added. Referring to appointment of new CEC, she warned that if the status quo continued, the elections could not be held on time. Vice President of Pakistan Bar Council Akhtar Hussain asked all the stakeholders to review the situation and introduce remedial measures for restoring peace in the province. Maulana Muhammad Khan Sherani, leader of Jammiat Ulema-e-Islam-Fazal, said present times called for the establishment of a welfare state and urged the military leadership not to interfere in civilian affairs of the country. The legislation in the parliament over all issues should be done in accordance with democratic norms and not with the thrust of majority, he added.  Haji Abdul Qayyum Changazi, President of Hazara Qaumi Jirga, lamented massacre of his community and said that fresh elections should be held across the province. Senator Abdul Malik Baloch of National Party said everyone had to accept the status of all people living in the country as laid down in the constitution. Awnash Bugti of the Jamhori Watan Party suggested that free and fair elections could be a base for the solution of Balochistan issue.-Thenation