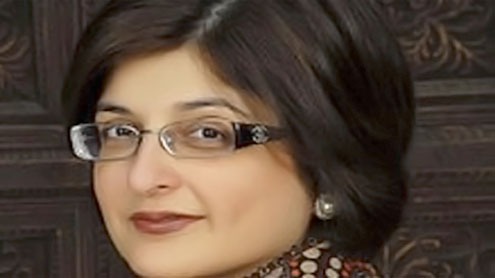 Three-member bench of the apex court headed by Chief Justice Iftikhar Muhammad Chaudhry issued the ruling while hearing the proceedings of Parliamentarian’s dual nationality case.
The counsel for the petitioner submitted documents suggesting Farahnaz Isfahani’s American nationality. In the court, a certificate of oath for getting US nationality was also submitted.Upon this Justice Jawab Khawaja remarked that in the oath it is written “if a gun is required to defend US than it would be picked up”.In his remarks, Chief Justice Iftikhar Muhammad Chaudhry said foreigners cannot be allowed to decide the nation’s fate while sitting in our assemblies.

“If Farahnaz is a US national, her membership will be suspended so that she doesn’t participate in the budget session,” the chief justice said.Attorney General Irfan Qadir said that judges have made up their minds before judgment which is against fair prosecution.He said the Pakistanis taking US citizenship have to take the oath of allegiance but their sympathies are always with Pakistan.Chief Justice said he cannot compromise in this case as this MNA could become the Prime Minister or Minister someday.

Later, written statement of Farah Naz Isfahani was presented to the court which stated constitution allows dual nationality holder’s to become MNA. She requested from the SC to cancel the case against her as she took oath as a loyal Pakistani.The court ruled that Farah Naz Isfahani would not partake in the proceedings of the National Assembly. It further said that Isfahani also could not participate in any of the committees of the National Assembly as well as the budget session.

The court also said that parliamentary members are the people’s representatives, and Ispahani has confessed to be a US national.The counsel of Interior Minister Rehman Malik requested the court for an additional time period to present certificate proving the surrendering of British nationality by his client. The SC adjourned the hearing till May 30. – Onlinenews