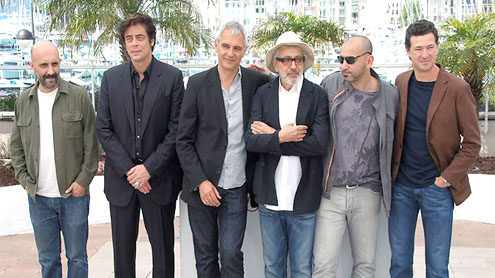 “7 Days in Havana”, a snapshot of the iconic Cuban capital brought to the big screen in seven chapters by seven top international film-makers, held its world premiere in Cannes.

Oscar-winning actor Benicio Del Toro makes his directing debut with the first of the chapters, about a young American tourist in Havana for the first time who gets a touristic tour of the city that is anything but traditional.Each director takes his turn to describe how a visitor spends a day in the city, with the seven stories loosely linked through locations or through characters that slip from one chapter to the next.

Palestinian Elia Suleiman, whose film “Palestine” won the Jury Prize at the 2002 Cannes Film Festival, directs chapter four, about a young Palestinian assigned to conduct an interview with a prominent Cuban figure in the city.Laurent Cantet, the French winner of Cannes’ top Palme d’Or prize in 2008, delivers the tale of how Martha and her neighbors go out of their way in order to set up a ceremony on time for the virgin Oshun.The other directors are Spain’s Julio Medem, Cuba’s “Strawberry and Chocolate” director Juan Carlos Tabeo, France’s Gaspar Noe, and Pablo Trapero of Argentina.The film was shown out of competition at the Cannes festival. – Khaleejnews