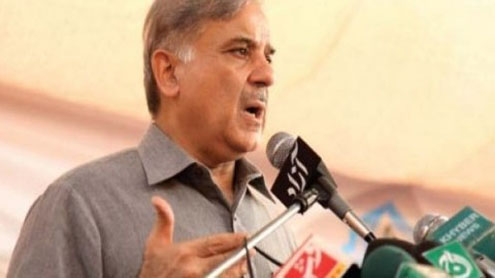 He was talking to Iranian Ambassador Ali Raza Haghighian on Wednesday.Sharif stated that due to the longstanding ties spanning over centuries, the people of the two countries are bound together in bonds which are strengthening with the passage of time. He said that in the changing economic scenario of the 21st century, Pakistan and Iran can benefit from each other’s industrial and agriculture development through the barter trade system.The prospects of promoting bilateral cooperation between Iran and the Punjab province in different sectors were discussed in detail during the meeting.

The chief minister said Pakistan and Iran have a similar stance over regional and international issues and that the relations between the two countries are a shining example of mutual respect and friendship.The CM added that being the members of the Economic Cooperation Organisation (ECO), the Organisation of Developing Eight Countries (D-8) and the Shanghai Cooperation Organisation (SCO), Pakistan and Iran should benefit from each others’ experience and skills in economic and trade sectors for the development of the two countries.

He said there are vast opportunities for investment in energy and other sectors in Punjab and that Iranian investors should benefit from them.He expressed his satisfaction over the fact that Iran has had a remarkable performance graph for the tourism, automobile, livestock, agriculture, transport, information technology and heavy engineering sectors. CM Sharif said Pakistan, Iran, Turkey, Afghanistan, Saudi Arabia and other oil-rich gulf countries, should evolve a joint strategy for peace and prosperity in the region.Shahbaz added that the Punjab government is transforming its infrastructure of public welfare to meet international standards with foreign cooperation.

He said a high level joint committee had been set up under the chairmanship of Advisor Sardar Zulfiqar Ali Khan Khosa for promoting economic cooperation with Iran so that Punjab could also make progress by benefiting from Iranian expertise and experience.Iranian Ambassador Ali Raza Haghighian appreciated the potential of Punjab and said the Iranian government is ready to import wheat and rice from Pakistan under the barter trade system.

He said that governor of Iranian province Persia will soon visit Punjab. An Iran Fair will also be arranged in Lahore while an exhibition will be organised regarding the Punjab province in the Iranian city of Mashhad.He stated that a delegation of the Tehran Chamber of Commerce and Industry, representing business and trade companies will soon visit Lahore for the purpose of further improving economic cooperation between Punjab and Iranian business organisations. Agriculture secretary and Punjab Investment Board Vice-Chairman informed the meeting about the prospects of bilateral cooperation between Iran and Punjab.Iranian Consul General in Lahore Muhammad Hussain Bani Asadi, CM’s Senior Advisor Sardar Zulfiqar Ali Khan Khosa, Special Assistant Zaeem Hussain Qadri and senior officers were also present.