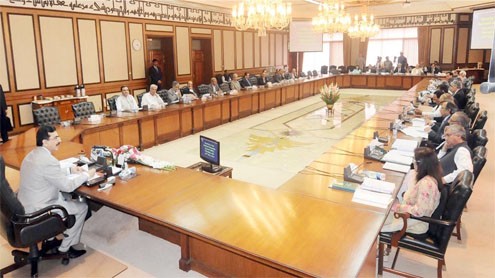 ISLAMABAD: Prime Minister Syed Yousaf Raza Gillani have given the approval for the total projected national development expenditure of Rs. 863 billion for the next financial year out of which federal PSDP size will be Rs. 350 billion.

PM while heading the National Economic Council (NEC) meeting on Thursday said that the poor and the common man is our number one priority. We will honor the commitment we made with them. We will put the poor at the heart of development process. They have the first right on state resources. Their children have the right to health, education, sanitation, water, housing and other social services. This is exactly what our agenda is and this is what we pursue

During the last four years, National Development Expenditure has been Rs. 2.2 trillion, including Rs 1 trillion by the Federal Government. Our Government increased the size of development expenditure from Rs 416 billion in 2008-09 to Rs 710 billion during the current fiscal year. This shows an average annual increase of 19.5% during this period, he said.The government was able to achieve growth rate in the range of 3.4% during the last two years. We know that this growth rate is not sufficient to achieve the overarching targets of poverty reduction and enhancing employment opportunities. For that we need at least a consistent GDP annual growth of over 7% over a long period of time.

He said that the government are proposing a GDP growth rate of 4.3% for the next fiscal year, which is quite achievable due to the base provided by our Government.Another positive development which I would like to share is the falling inflation rate. The CPI which witnessed increase of 20.8 percent during 2008-9, is now reduced to around 11 percent. Similarly the food inflation has been brought down from 23.7 percent in 2008-09 to around 11 percent during the current fiscal year and estimated to be in single digit by the end of next fiscal year.He said that since inception of our Government in 2008, we had to face serious challenges that hampered our efforts to achieve high economic growth.

These challenges included world-wide economic recession, back-to-back floods in 2010 and 2011, rising international food and fuel prices, security issues, energy shortages, infrastructure constraints, subsidies, circular debt and loss making public sector enterprises. It all negatively impacted investment in the country and kept the economy under pressure.He was of the view that serious impediments and challenges, our Government has tried its best to achieve robust and sustained economic growth, improve investment climate, create employment opportunities, improve social sector service delivery and to reduce poverty from the country.

The present government has introduced prudent policies while introducing reform measures as part of Stabilization Programme. The aim was to control the fiscal deficit that had reached 7.6% of GDP when the democratic Government took over.Even after devolution of social sector Ministries to provinces, the Federal Government committed to bear over Rs 100 billion during the current NFC period for vertical Health, and Population Welfare Programmes and special initiatives. We have honored our commitment and during the current fiscal year, Rs 27 billion were provided for these activities in Federal PSDP. Similar amounts for these activities have been proposed during the next year’s PSDP, he said.

In accordance with the priorities set by my government, Planning Commission has endeavored to maintain regional balance in allocation of funds for the projects. Sufficient allocations have been made for economic and social uplift of less developed regions and special areas, including AJ&K, GB and FATA.We initiated important mega projects in energy and infrastructure, which would provide the economy a base for sustainable economic growth in future.

Our Priority is to complete projects nearing completion so that the people may benefit from these projects. Mega projects completed during our Government include Chashma Nuclear Power Project 2, Mangla Raising Project, Mirani Dam Project, Islamabad Peshawar Motorway, Islamabad Muzaffarabad Expressway (upto Lower Topa), Khan Khawar Hydropower project. Some of the mega projects we are initiating next year include: Tarbela 4th Extension, Rehabilitation of NHA Network, Realignment of KKH, sholarship pogramme for sudents of Balochistan and Abdul Wali Khan University, Mardan.

In the same spirit, we have launched management reforms in the energy sector. Boards of Directors of DISCOs have been reconstituted with professional management. GENCO Holding Company has been created to solve the circular debt issue. Efforts are under way to reduce default in private sector and coupled with adoption of conservation measures we would be able to save upto 1000 MW of electricity.We also introduced measures to improve governance of the State Owned Enterprises, better expenditure management of public sector and to improve governance and capacity of the Tax Administration.

Planning and Development Division has done commendable job in finalizing the Implementation Plan for the Framework of Economic Growth, the Annual Plan and PSDP for 2012-13. NEC is to consider and approve the proposals in principle. The PSDP for 2012-13 will become part of our budget proposals, which will be submitted to the Parliament for approval. – Onlinenews