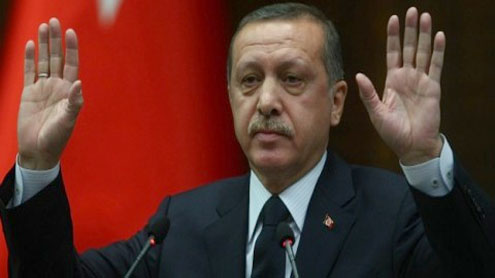 ISLAMABAD: Pakistan on Tuesday got rare support from a NATO member country on the blockade of NATO supplies through the country and seeking an apology from the US government over the Salala attack, as Turkish Prime Minister Recep Tayyip Erdogan endorsed Islamabad’s stance and told a news conference that Turkey respected Pakistan’s decision.

The Turkish prime minister also endorsed Pakistan’s demand for an apology from the US over the killing of its troops at Salala checkpost. Addressing a joint press conference with Prime Minister Yousaf Raza Gilani after inking nine agreements for cooperation in diverse fields, Edrogan said the opening of NATO supply route was the discretion of Pakistan. “However, as a member of NATO, Turkey believes that such issues should be resolved through mutual dialogue,” he said.

Gilani said the final decision to open, what Pakistan now called Ground Lines of Communication, and its timing, would be made in line with the recommendations of the parliamentary committee. However, Gilani made it clear that “Pakistan wishes to move along with the world”. “We wish to make it clear that Pakistan is part of the solution, not the problem for Afghanistan.” The PM reiterated Pakistan’s stance for a “stable, sovereign, prosperous and independent Afghanistan”, and added that it desired a political solution that was Afghan-led and Afghan owned. He also praised the support extended by Turkey’s President Abdullah Gul to Pakistan at the May 20 NATO summit in Chicago. “The world must have recognition of the services rendered by Pakistan in its fight against terrorism,” Gilani told reporters.

He said a decision based on the recommendations of the parliamentary committee would not only be long lasting, but also have the endorsement of the people of Pakistan. Asked whether his country would stay in Afghanistan until the NATO’S deadline of 2014, the Turkish prime minister said his country was committed to return of peace and stability to Afghanistan and would be the last one to withdraw its troops from the war ravaged country. Turkey has over 1,300 troops in Afghanistan and is one of the largest contributors among the 50 countries that comprise the International Security Assistance Force (ISAF). He said there were different views about the withdrawal of troops from Afghanistan and while France wanted an immediate pullout, Germany called for a joint gradual pullout.

He, however, was of the view that the withdrawal could be delayed.Erdogan vowed to work along with the Afghan brothers in rebuilding their nation and said it was also supportive of the new US initiative of $2 billion assistance to help Afghanistan stand on its own feet.Terming Pakistan and Turkey as “best friends” having a “time-tested” relationship, Prime Minister Gilani said he shared with his Turkish counterpart all matters related to the NATO supply route and the state of relations with the neighbouring countries, the geo-political and regional situation.

When Erdogan was asked whether he would be willing to play a mediatory role between the Pakistani government and the opposition, he said he believed the government and opposition needed to stand united to serve the country.He said the people of Pakistan would suffer if the opposition and the government squabbled and expressed hope that they would stand united, shoulder to shoulder, to make Pakistan strong.Erdogan said the two countries had moved forward on the Preferential Trade Agreement and hoped to sign it at the earliest.He said the bilateral trade between the two countries was 175 million nine years ago and had now risen to $1 billion.“It is our goal to raise it to $2 billion at the earliest.” – PT

Military to take charge of air space for Olympics