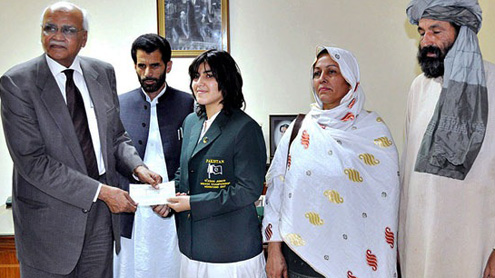 The national cricket and hockey teams for the Sri Lankan tour and the Azlan Shah Cup have been named by the respective bodies, the Pakistan Cricket Board (PCB) and the Pakistan Hockey Federation (PHF), and as is the norm in such exercises, they were not without some strange choices and contentious exclusions. However, though eyebrows may be raised, especially in the case of the cricket squads (three of them now) there is little reason to be surprised at the final lineups.

In the end, it all boils down to the golden words, long live official indifference and undisciplined player power, long live patronage and long live cronyism. What really alarms and bewilders is that these twin events were meant to be a major dress rehearsal for bigger things to come, the Twenty20 World Cup in Sri Lanka in September and of course, the 2012 London Olympics. In the latter event, hockey held out our best (and only) hope of a place on the most memorable of podiums. A long shot, no doubt, a living in a fool’s paradise perhaps, but still representing an outside chance.

One can say that the leading hockey stars and veterans Shakeel Abbasi and Rehan Butt in particular, and the others ‘rebels’ including Zeeshan Ashraf, Adnan Maqsood, Waseem Ahmed, Tariq Aziz and Imran Warsi left little leeway to the selectors by their participation in the illegal World Hockey Series, which entails penalties by the International Hockey Federation (FIH). Whatever the arguments for and against the ban, the loss of Abbasi and Rehan will deal a severe blow to the greenshirts’ already slim chances, as the duo was still capable of vintage performances. Why do these unpleasant incidents and extreme situations keep recurring in Pakistan cricket, hockey, squash, tennis…? Remember, in hockey, Pakistan has already slumped to its worst ever (eighth) position in the Beijing Olympics 2008. The cricket squads for the trio of formats holler just four words: Mohammad Sami strikes gold! The 31 years old fast bowler, a revolving door in-and-out component of the national side for years, has been recalled from the wilderness in a big way, performing a hat-trick in the selection sweepstakes.

Sami’s name figures alongside only those of Saeed Ajmal and Mohammad Hafeez in all the three genres of cricket. Talk of the bullish sentiment for him. The induction of Faisal Iqbal in the Test side and of the immovable object Imran Farhat in the ODI squad shows that in the Karachi-Lahore cricket wars, port city has a clear edge at this point in time. Similarly, the selection of Yasir Arafat (age 30) and Sohail Tanvir (27) has raised concerns about their being past their best, while two of the ‘newcomers’, the high scoring Mohammad Ayub (age 32) and wicketkeeper Shakeel Ansar (33) are not spring chickens either. Some of the selected players seem to be in the wrong squad.

What is the philosophy behind the cricket selection? It is essentially conservative, of erring on the side of caution, of playing it safe rather than being bold and imaginative. All schools of thought, so to speak, and diverse interests have been entertained, and the PCB has hedged its bets or spread in both youth and experience from ages 19 (Raza Hasan) to almost 38 (Misbahul Haq). But it appears that no one from Balochistan was considered, though the game is intensely popular in the troubled province. So on the whole, compromise, appeasement and ‘saving our souls’ appear to have been the primary considerations in selecting the three cricket squads. But ‘slow and steady’ does not always win the race, especially in the ODIs and Twenty20 formats. Also, if the selection was based primarily on performance in the domestic tournaments, why were Ali Imran (60 wickets), Imran Khan (58 wickets) and Fahad Masood (52 wickets) overlooked despite their better averages in the Quaid-e-Azam Trophy, above Lucky Sami’s 39 wickets? Lahore City Cricket Association (LCCA) president Khawaja Nadim Ahmad also complained of the omission of Usman Salahuddin, the highest local run-getter (1622 runs in all three formats in domestic tournaments, average 81.25, with seven centuries and eight fifties) from the squad for the Sri Lanka tour.

While the infusion of fresh blood in sports is laudable and in fact a necessity, it must be balanced with the fact that a young promising talent is not ruined by being thrown prematurely at the deep end. The T20 inclusion Raza Hasan, a left arm spinner, will have to be handled with extreme care as he is only 19. But then, we have to rely on the new names, as the day of the super star, in which every national cricketer was a household name, is a phenomenon of the past. There was a prominent but unflattering story in an English daily on May 16 about PCB chairman Muhammad Zaka Ashraf, also the owner of Ashraf Sugar Mills. There was also controversy during his earlier stint with the Zarai Taraqiati Bank Limited (ZTBL). So is the case with the officials of the Pakistan Hockey Federation (PHF) – president Qasim Zia and secretary general Mohammad Asif Bajwa. Their stint has also not been without its share of controversies. What will be the impact of such controversies on the younger and more impressionable of their cricket and hockey wards?

And herein lies the root of our dilemma, both in the national sphere and the sporting arena: the notorious system of patronage to the exclusion of merit and professionalism. Under the powerful patron’s benevolent gaze, the pick and choose appointees can survive scandals and failures that would crush an ordinary mortal. It is time that the slogan, ‘democracy is the best revenge’ is also applied in the case of Pakistan sports, and all the officials are duly elected, instead of being appointed on whims and fancies, on personal likes and dislikes. – Dailytimes