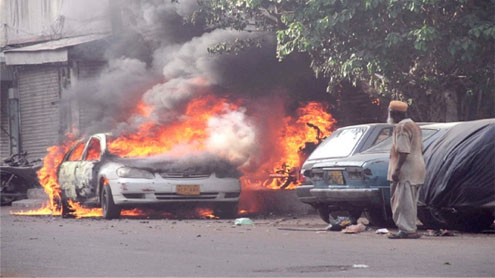 KARACHI: As many as 11 people were killed and 19 others wounded when armed men attacked a rally by outlawed operatives of the People’s Aman Committee and other nationalist organisations against the Mohajir province movement, in Lyari area of the city.

According to details, Awami Tehreek leader Ayaz Palijo had announced to take out a rally against the Mohajir province, while the Aman Committee and other Sindhi nationalist organisations supported him.The rally was taken out from Football House and moved towards the Cheel Chowk, the most sensitive area where police have failed to restore peace despite a week-long operation that claimed 40 lives last month.

Participants of the rally were holding placards and banners inscribed with comments against the division of Sindh, and also chanting slogans against the Mohajir province movement and other rival political groups.As soon as the rally reached near Ghas Mandi, close to Cheel Chowk, unidentified gunmen started firing on it and fled, leaving four demonstrators and passersby injured.

Following the incident, participants of the rally staged a sit-in protest at Napier Road near Pan Mandi. However, armed men appeared again and resorted to indiscriminate fire at the protest. They also opened indiscriminate fire in various areas, including Lee Market, Garden and other areas. The firing incidents resulted in over 70 people, including women and children, sustaining bullet wounds. The injured were rushed to the Civil Hospital Karachi, Lyari General Hospital and Abbasi Shaheed Hospital.Witnesses said the firings incidents brought a halt to commercial and non-commercial activities as shopkeepers were trapped inside their shops and localities.

Those killed included M Iqbal, a security guard at Civil Hospital, who was shot dead near KMC workshop, while Yousuf Abdullah, Amina, Ejaz Khan, Manzoor Fareed, Sher Muhammad, Babar, Sharifa Shamsher, Ghazala Batool were also killed. Police sources said Ghazala was an employee of PIA and a resident of Gulshan Hadeed. They also claimed seven people died due to firing at the Awami Tehreek rally while four others were killed in Dhobi Ghat area during clashes in reaction to the firing.

Later, heavy contingents of law enforcement agencies rushed to maintain law and order following the violence.Meanwhile, Prime Minister Yousaf Raza Gilani and President Asif Zardari strongly condemned the killing of innocent people in Karachi. Gilani sought a report from the provincial government on the abhorrent killings and both him and the president directed strict measures to bring peace to the city.